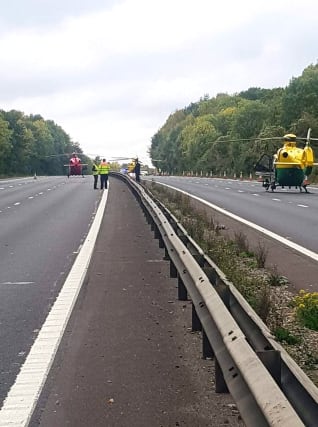 An autism school has been left “devastated” after two members of staff were killed in a motorway crash involving a minibus and lorry.

Tragedy struck on the M4 on Thursday afternoon as a group from Prior’s Court in Berkshire returned to the specialist school after taking three young adults with severe autism to a work placement.

The school said two of its staff died at the scene, while three more, including the driver, were taken to hospital with serious injuries.

The three young adults were also taken for assessment and treatment, although they were not seriously hurt.

Mike Robinson, the school’s chief executive, said: “I speak on behalf of us all at Prior’s Court when I say we are devastated about the road traffic collision which happened today.

“I send my deepest condolences to the families, friends and colleagues of the two people who lost their lives.

“At this time, there are three further staff members receiving treatment and my thoughts are very much with them and their families.

“In such tragic circumstances, we are grateful that all the young people involved are safe and without serious injuries, and we will be doing everything we can to safeguard their wellbeing at hospital and upon their return.”

Emergency services were called to a stretch of the M4 in Berkshire at 12.20pm on Thursday after the two vehicles collided between junction 14 at Hungerford and junction 13 at Chieveley.

The motorway was closed in both directions so air ambulances could land at the scene.

The lorry driver was taken to hospital with minor injuries.

The major route remained closed for nine hours on Thursday as a police investigation got under way.

Thames Valley Police has appealed for eye witnesses of the crash, or anyone with dashcam footage, to contact them on 101 quoting reference number URN 545 (11/10) or by using their online form at thamesvalley.police.uk