Democratic Unionist MPs who prop-up Theresa May's Government are preparing to vote against her budget if the Prime Minister breaks their Brexit red lines.

The radical move is one of the options being considered by the DUP if attempts to nail down a deal with Brussels include any proposals that would leave Northern Ireland being treated differently to the rest of the UK, the Press Association understands. 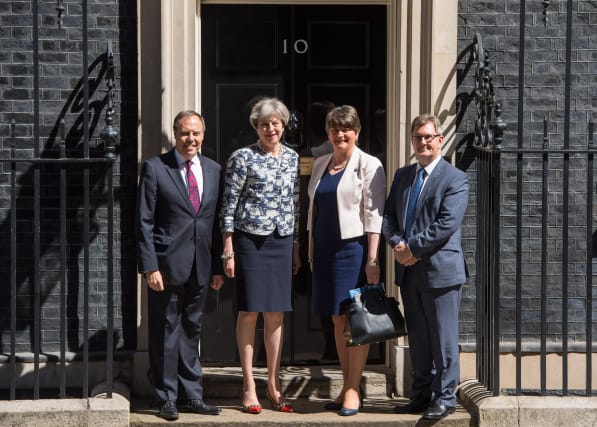 Losing the party's support in the Commons would mean possible defeat on the budget and a no-confidence vote.

DUP leader Arlene Foster insisted on Tuesday that her party would not accept customs or regulatory checks on goods travelling in either direction between Northern Ireland and Great Britain after meeting EU chief negotiator Michel Barnier in Brussels.

A DUP spokesman said: "The Government is well aware of our position on this issue. Our position hasn't changed and we don't expect the Government will change its position."

The DUP has 10 MPs, although Ian Paisley will not be able to vote in the Commons until November 20 after being suspended for failing to declare two family holidays paid for by the Sri Lankan government.

Mrs May, meanwhile, urged MPs across the Commons to act in the national interest and back a Brexit deal amid warnings that "decisive" progress is needed in the negotiations before a crunch Brussels summit next week.

Mr Barnier briefed top EU officials behind closed doors at a regular meeting of the College of Commissioners on Wednesday, which also heard European Commission secretary-general Martin Selmayr warn of the need to be prepared for "all outcomes" from Brexit.

In Westminster, the Prime Minister urged MPs to do their "duty" to implement the result of the Brexit referendum as she struggled to maintain discipline within the Tory ranks.

It was Mrs May's first appearance in the Commons since last month's Salzburg summit, when EU leaders told her that her Chequers blueprint for Brexit would not work.

She has come under growing pressure from Brexit-backing Tories to drop the plan agreed by the Cabinet at her country residence in July and instead seek a Canada-style free trade deal.

But veteran Europhile Tory Kenneth Clarke urged her to ignore hardline Brexiteers and bring forward a deal acceptable to pro-EU MPs on both sides of the Commons.

The former chancellor said that would reveal the "hardline Eurosceptic views" of the "Bennites" in the Labour leadership and the "right-wing nationalists" on the Tory benches were in the minority in the Commons.

Labour has indicated it will oppose a deal based on the Prime Minister's Chequers plan and will push for a general election or, possibly, a second referendum.

Eurosceptic Tories claim dozens of Conservatives are also prepared to vote against a Chequers-style deal.

The Prime Minister said: "I would hope that everybody across this whole House will put the national interest first."

She added they should also remember that Parliament gave the British people the decision over Brexit, and following the 2016 referendum result "it is our duty to ensure that we leave".

– Treasury minister John Glen backed a previous prediction by the Bank of England that around 5,000 financial services jobs will have been shifted out of London by "Day One" on March 29.

– National Audit Office chief Sir Amyas Morse said it was "not impossible" that flights would be grounded if there was an "unfriendly" break-up with Brussels.

– The International Monetary Fund said "growing anxiety" about a breakdown in Brexit negotiations could result in "contractual and operational uncertainties in the United Kingdom and elsewhere in Europe".

The negotiations are reaching a critical stage ahead of next week's European Council summit.

The October 18 meeting was initially framed as the deadline for agreement on the terms of UK withdrawal from the EU, as well as the publication of a political declaration on future relations in areas such as trade and security.

But with both sides confirming that differences remain on issues such as the status of the Irish border, expectations are growing that the final moment of decision will be put back to a special summit in November.

Following the College of Commissioners meeting, two commissioners stressed the importance of continued UK/EU co-operation on security after Brexit.

British security commissioner Julian King said: "There are some issues that will need to be addressed in the context of a future partnership, including on security. There is a strong shared self-interest in finding a way of maintaining co-operation on security, if that proves to be possible."

Home affairs commissioner Dimitris Avramopoulos said: "I don't know what will be the outcome of these negotiations. Let's hope that we are going to have a positive end.

"But as far as security is concerned, it is very important in order to ensure the security of our citizens and safety for our countries to keep working together in the future."

Reports had suggested Mr Barnier would present a paper setting out new EU proposals at Wednesday's meeting, but it is thought this has been delayed until closer to the summit date.

The UK Government is also due to publish its own revised proposals for the Irish border, but Downing Street has said only that these will appear "in due course".