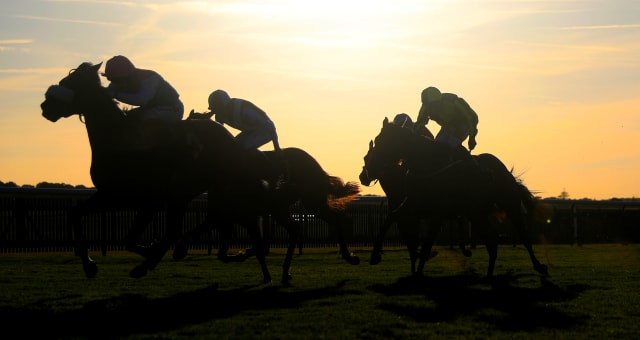 The colours deployed on hurdles and fences on British racecourses may be set to change.

A new study suggests that changing the colour could improve the vision for racehorses.

Presently, the colour used on hurdle frames and fence take-off boards and guard-rails is orange, which is based on human vision.

However, horses have reduced colour vision compared to humans and only differentiate objects in a palette of blues and yellows.

The new research shows that other colours should be more effective in offering visibility to horses and reducing the risk of falls and injuries for horses and jockeys.

As a result of the research, a recommendation has been approved by the sport’s Racecourse Committee that a phased trial should be carried out using fluorescent yellow for all hurdles and guard-rails, and fluorescent white for take-off boards at fences.

These colours have been determined to maximise visibility under a wide range of conditions for both humans and horses.

The study into equine vision was commissioned and funded by the British Horseracing Authority and Racing Foundation and carried out by Dr Sarah Paul and Professor Martin Stevens from the University of Exeter.

The research phase of the project included testing the visibility of orange markers and other potential colours at 11 racecourses.

In collaboration with trainer Richard Phillips, they also tested the behavioural responses of horses to more prominent colours in a controlled environment.

Retired jockey Ian Popham and conditional jockey Danny Hiskett acted as riders of the horses throughout the trial.

A more extensive trial will take place at training grounds in order to build up data before rolling the trial out to a live racing environment.

The results of the research and the ongoing trials will be shared with other racing jurisdictions and equine organisations.

The faller rate in British racing has reduced by 29% since 2004 as a result of ongoing investment in racecourse safety.

Mr Popham, a grade 1 winning jockey, said: “From riding over the different coloured fences it was clear to me that over some colours the horses reacted differently and showed the obstacle more respect.

“I’m sure other riders will feel the same and this feels like a great idea and opportunity to make the sport safer for both horses and jockeys.”

Prof Stevens added: “Understanding how animals see the world, and using cutting-edge tools to investigate this, has a valuable role to play in guiding the safety and welfare of animals and humans in a variety of contexts.

“This project demonstrates how modern science can look to have widespread positive implications in human society and our interactions with animals.”