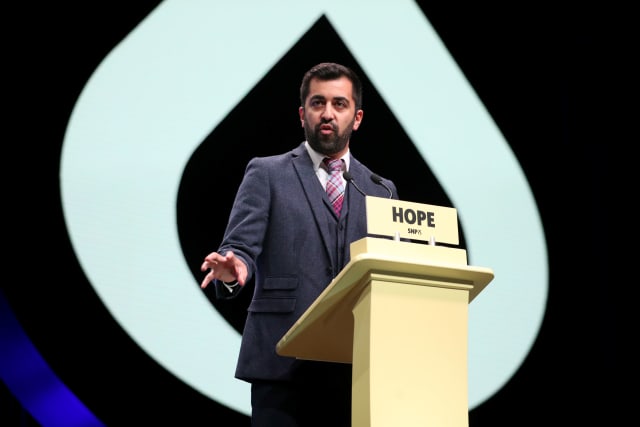 Humza Yousaf said his rival party was historically seen as standing up for ethnic minorities but this has changed and raised questions over structural racism.

He highlighted two Labour councillors who were suspended for alleged racism and a row over the internal party selection process in areas Glasgow.

Labour suspended Davie McLachlan, the leader of the South Lanarkshire Council group, after he allegedly told Anas Sarwar MSP he could not back him for Scottish Labour leadership as Scotland was not ready for a “brown, Muslim Paki”.

Dumfries and Galloway Labour councillor Jim Dempster was suspended after he allegedly told government officials if Mr Yousaf had visited the area “no-one would have seen him under his burka”.

Both councillors deny the allegations.

Speaking at a fringe event at the SNP conference in Glasgow, Mr Yousaf said: “My point is you add all these things together and there is a question around, and I use purposely the term, structural racism.”

He said police, government, all political parties and companies have to look at whether they have structural biases in their institutions, arguing “the world isn’t colourblind” and saying he faces racism daily, which can be structural.

He added: “My point in all of this, is to question Labour, you used to be the party that stood up for minorities.

“You are now the party that is seen – rightly or wrongly so I just ask the question – to be working against ethnic minorities.”