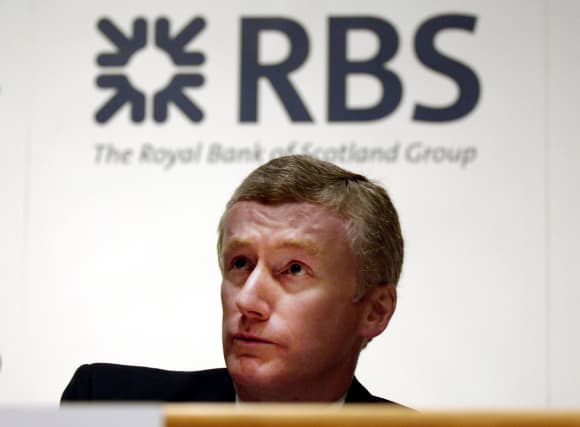 This month marks 10 years since the Government stumped up billions of pounds to prop up the UK banking sector, including Royal Bank of Scotland (RBS) which is still 62% owned by the taxpayer a decade on from the crash.

We take a look at the major events that have impacted RBS over the past decade.

– August: RBS reports a bottom line loss of £761 million for the half year. It is the bank’s first six month loss.

– October 13: The UK Government injects £20 billion into RBS to help prop up the struggling lender as the financial crisis takes hold. The taxpayer now holds a 70% stake in the lender.

– October: RBS announces chief executive Fred Goodwin, who has been at the helm since 2001, will step down. The now infamous banker known commonly as “Fred the Shred” for his cost cutting tactics is replaced by Stephen Hester.

– June: Fred Goodwin cuts his annual pension by about £200,000 amid widespread public anger over the financial crisis and RBS bailout.

– December: The second tranche of the RBS bailout sees the Government inject a further £25.5 billion in the bank, taking public ownership to 84%.

– June: Santander makes an offer to buy 316 branches, later known as Williams & Glyn, though the deal will later prove too challenging to pursue due in part to IT complications of hiving off the business from RBS.

– May: RBS sets aside £850 million to help cover the cost of mis-selling of payment protection insurance (PPI) to customers. The scandal will require banks across the industry set aside billions of pounds over the coming years.

– January: Fred Goodwin is stripped of his knighthood. It was originally awarded in 2004 for “services to banking”.

– October-December: RBS puts aside £700 million to cover the mis-selling of interest rate hedging products to customers.

– February: RBS is fined £390 million by UK and US regulators in relation to the manipulation of Libor interbank exchange rate. The scandal involves a number of banks across the industry.

– June: Stephen Hester announces he will step down as chief executive by year end, as the Government looks to move the bank forward from its rescue phase. By October, the Kiwi boss of the bank’s UK retail division, Ross McEwan, takes over as chief executive.

– December: RBS is fined 391 million euro by EU authorities over the Libor scandal.

– January: The bank sets up the so-called bad bank meant to handle toxic assets dating back to the 2008 banking crash. RBS Capital Resolution (RCR) holds around £29 billion worth of assets.

– April: RBS receives EU approval to extend the deadline for its state aid requirements in exchange for divesting Citizens Financial Group. After three years of unsuccessful negotiations with potential purchasers of the SME business known as Williams & Glyn, RBS says it will look to establish a standalone bank.

– April: The UK’s Financial Conduct Authority launches an investigation into RBS’ Global Restructuring Group, which has been accused of pushing small businesses towards failure in hopes of picking up assets on the cheap.

– February: Ross McEwan accelerates a strategy that will see the bank exit 26 countries and significantly downsize the investment bank.

– August: RBS abandons the creation of the stand-alone bank that would be called Williams & Glyn, meant to be part of EU state aid requirements.

– November: RBS sets aside £400 million to help cover the automatic refund of complex fees and a complaints process over its treatment of customers at the now defunct Global Restructuring Group. The scandal will continue to grip the bank two years on.

– December: RBS reaches a settlement with claimant groups over a legal case relating to its 2007 rights issue. The bank sets aside £800 million to cover the total costs of settling with all parties.

– June: RBS puts aside another £100 million as it announced a final settlement with the remaining claimants in relation to the rights issue legal case.

– July: RBS announces a 5.5 billion US dollar settlement with the US Federal Housing Finance Agency in relation to alleged misselling of residential mortgage backed securities (RMBS) in the US. RMBS are one of the financial instruments blamed for precipitating the financial crash in 2008.

– September: The Treasury and European Commission reach a formal agreement to amend the terms of the RBS state aid agreement. Rather than forcing RBS to get rid of Williams & Glyn, the bank will finance what will become a £775 million fund meant to boost competition in the UK’s SME banking space.

– May: RBS reaches a 4.9 billion US dollar settlement in principle with the US Department of Justice in relation to the alleged mis-selling of residential mortgage-backed securities.

– July: RBS and senior managers dodge disciplinary action after a four-year probe by the Financial Conduct Authority concludes that the Global Restructuring Group’s activities – which involve unregulated business lending – does not fall within its remit.

– August: RBS reaches a final settlement with the US Department of Justice and declares its first shareholder dividend in a decade.