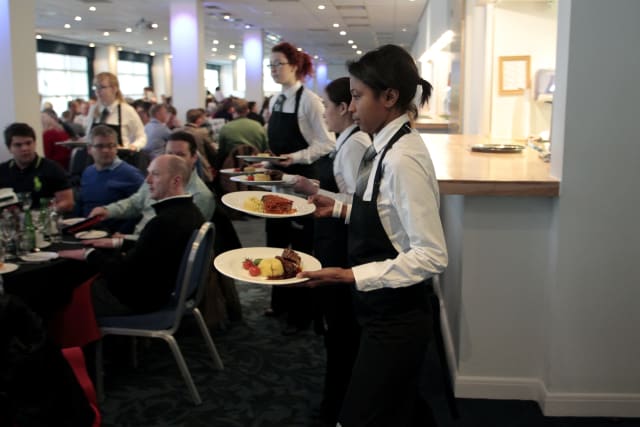 The closely-watched Markit/CIPS services purchasing managers’ index (PMI) showed a reading of 53.9 in September, down from 54.3 in August.

A figure above 50 indicates growth.

Economists had been expecting a reading of 54.0.

Firms recorded slightly higher confidence in September, but political uncertainty around the outcome of Brexit negotiations weighed on growth projections.

Chris Williamson, chief business economist at IHS Market, which compiles the survey, said Brexit worries are “keeping business optimism firmly anchored at levels which would normally be indicated of an imminent slowdown”.

But he added that the solid growth pointed to “robust growth” in the UK economy since weather disruption affected businesses earlier in the year.

Higher business activity during the period was attributed to a solid increase in new work and competitive pricing strategies.

Staff shortages at services companies have now led to five months of an increasing backlog, with levels of unfinished work steadily rising.

This was good news for employees, with the tight labour market often pushing up starting salaries.

Samuel Tombs, chief UK economist at Pantheon Macroeconomics, said: “The economy remains a long way from overheating and growth will likely slow further if Brexit talks aren’t amicably concluded soon, given that firms are reporting to Markit that political uncertainty is weighing on budget setting and confidence.”

Meanwhile, Howard Archer, chief economic adviser at EY Item Club, said: “The slightly softer set of September PMI’s reinforce our belief that interest rates will rise again until after the UK leaves the EU in March 2019 given the major uncertainties that are occurring in the run-up to the UK’s departure.”