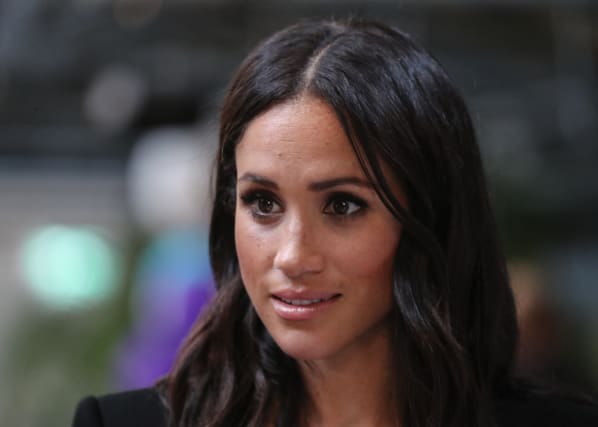 The Duchess of Sussex’s half sister Samantha Markle has apologised to Meghan live on television, saying: “I wish things could be different”.

Appearing on Jeremy Vine on 5, Ms Markle said: “I’m hoping that we can have a happy ending”.

Ms Markle, who was not invited to the royal wedding and has not spoken to Meghan in years, said she is the UK to make peace with her famous half-sister.

But she defended insulting the royal former actress on Twitter.

Jeremy Vine tackled Ms Markle on why she had been rude and insulting to Meghan, having called her Cruella de Vil, Duch-ass and the Duchess of Nonsense.

“(My father) was being purposely ignored,” Ms Markle replied. Thomas Markle is father to both Samantha and Meghan.

“We were hoping that private channels would be used. When they failed we went public.

She added: “The goal at that point wasn’t just getting closer. It was also about bringing out a very important point that you don’t isolate family, you are a humanitarian.”

Vine replied: “You want to shame her – that’s what it is.”

Ms Markle added: “The public were making a mockery of the family and it had to stop. Perhaps I was frustrated. I was lashing out more at the media.”

Ms Markle said she was doubtful of being able to make contact with Meghan while she was visiting the UK.

“I was hoping that maybe we would have the chance to speak, that she would know I was here. But I don’t think that’s going to happen.”

She added that the whole saga could have been “nipped in the bud” had the Markle family been invited to Meghan and the Duke of Sussex’s wedding.

In a direct message to Meghan, she said: “Everybody was hurt at not being included or invited to the wedding.

“I felt as though it could have all been nipped in the bud had everyone been included and we all agreed to move forward with positive resolve and the hurt feelings wouldn’t have snowballed.

“It doesn’t mean we love you any less. I just think families can be this way when there’s confusion and when people are hurt, so moving forward, I apologise and I wish things could be different.”

Ms Markle also took part in a phone-in with members of the public, and was met with a barrage of criticism from callers.

Chris from Kent told Ms Markle: “All we’ve seen is the hate you’ve spewed against your sister.

“If you actually love your sister I think this should have been done in private, not on social media, or going on television saying you’re sorry… what you’re doing is not right.”

Ms Markle replied: “Most of what you read in the tabloids is not true… There have been so many times I’ve said, in live interviews, favourable things but they were not printed.”

Lindsay from Leeds declared that Ms Markle should have been “stopped at border control”, adding: “She’s got no relevance to be here”.

However Victor from London called in to say Ms Markle was an “absolutely lovely lady” and that should Harry and Meghan have a baby, she should be godmother.

More recently she has vented her fury, accusing the duchess on Twitter of hypocrisy and being cold and inhumane in her treatment of their father.

Meghan’s father Thomas Markle pulled out of walking his daughter down he aisle due to ill health and after being caught staging photos with the paparazzi for cash.

Since Meghan became a royal, Ms Markle has hit out at her for being “cold”, accused her of ignoring her father, branded Harry a “wuss”, and has gone as far as to say she would blame Meghan should Thomas Markle die.