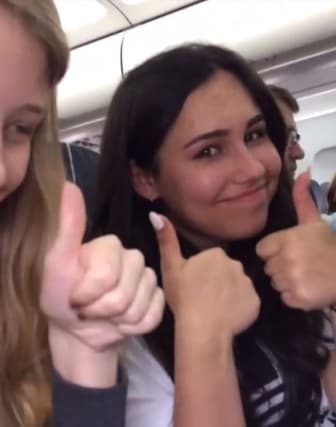 A video filmed moments before Natasha Ednan-Laperouse fell ill shows her smiling and laughing with her best friend.

The girls put their thumbs up to the camera, make peace signs with their fingers and hold each other’s hands in footage from on board the British Airways flight from  London Heathrow.

It was the start of the summer holidays and the first of a number of trips and events popular schoolgirl Natasha had planned.

She was travelling to Nice as a special treat to stay at her grandparents’ apartment with her friend,  and father Nadim, 53, the founder and chief executive of WOW Toys.

Natasha hoped it would be “her best summer ever” but suffered a fatal allergic reaction to a Pret A Manger baguette she had eaten for breakfast and died on July 17 2016 after collapsing on the flight.

Her father and mother Tanya, 51, from Fulham in west London, said they have not been able to bring themselves to unpack her bag from the trip.

“After this, she had a week planned at a youth Christian Festival in Norfolk and then we had a two-week family holiday planned in Greece,” they said in a statement before her inquest.

“It was going to be her best summer ever,”

They described their daughter as a popular girl with a “great sense of humour” who was known for her “contagious laughter”.

Natasha,  an animal-lover who enjoyed horse riding and ice skating, was working towards her GCSEs and wanted to pursue a career in law.

Her parents and younger brother Alex, 15, said the family are still trying to adjust to life without their “beloved girl”.

“Everything we say and do is a reminder that she isn’t with us – her empty bedroom, school uniform hanging in her wardrobe, her holiday bag packed for her holiday in Nice has never been unpacked. We can’t bear to,” they said.

“Her closest friends still miss her every day and have found life very difficult to adjust to without her.”