May must get on and reform abortion law in Northern Ireland, MP says 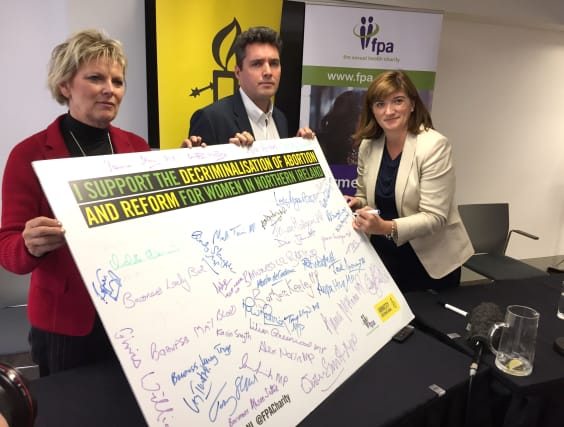 A Conservative MP has urged the Prime Minister to get on and act to reform abortion law in Northern Ireland as a party colleague branded the current regime barbaric, cruel and callous.

Huw Merriman said it was the “right time” for Theresa May’s government to let Westminster vote on the restrictive laws on terminations in the region.

Fellow Tory MP Anna Soubry echoed the call as she branded the near blanket ban on abortion as unacceptable in the modern age.

She said: “In Northern Ireland I think your laws are cruel, I think they are callous and they don’t work anyway because we know that 900 women every year are coming over to England and Wales to terminate their pregnancies – and I think that’s appalling, I think that’s barbaric.

“I think a woman in Northern Ireland should have exactly the same rights as any other women in the United Kingdom.”

Ms Soubry and Mr Merriman were in Belfast on Friday along with former Government minister and fellow Conservative MP Nicky Morgan to urge reform on the abortion issue.

“I would say to the Prime Minister that this has got to be the right time to get on and act and actually reform and modernise and really help people in a terrible situation,” said Mr Merriman.

On their visit to Belfast, the trio of MPs held meetings with midwives, doctors, politicians and lawyers challenging the current regime in the courts.

The visit came on the same day that senior figures in Sinn Fein, the SDLP, the Ulster Unionists and the Alliance Party issued a joint statement urging reform.

Abortions in Northern Ireland are illegal in all but exceptional medical and mental health circumstances.

The Government has resisted calls to step in to legislate for reform in the wake of a recent Supreme Court judgment that found the current legal framework incompatible with human rights laws.

In June, a majority of Supreme Court judges said the ban on terminations in cases of rape, incest or fatal foetal abnormality needed “radical reconsideration”.

Mr Merriman and Ms Soubry both rejected any suggestion the Government was reluctant to push for reform due to its confidence and supply deal with the Democratic Unionists, who oppose changes to the abortion law in Northern Ireland.

“I would regard the DUP MPs as colleagues and friends of mine, they work incredibly hard, but abortion has always been a conscious vote in Westminster,” said Mr Merriman.

“So therefore it should have nothing to do with supply and demand or government pressure – this is a free vote and the powers rest with Westminster.”

Ms Soubry added: “I don’t think the relationship with the DUP is actually a factor in it.”

Earlier this month, the Women and Equalities Committee at Westminster announced an inquiry will examine whether the Government has a responsibility to reform abortion laws in the region or whether the contentious issue should only be one for devolved ministers to determine.

Next month, a private member’s bill will be tabled at Westminster aiming to remove sections of the 1861 Offences Against the Person Act that make abortion a criminal offence in England, Wales and Northern Ireland.

The 1967 Abortion Act in England and Wales provided for exemptions to the 1861 Act, enabling legal abortions.

Ms Soubry said: “Women and girls in Northern Ireland are not second-class citizens.

“They deserve access to free, safe and legal abortion services without having to travel to other parts of the UK.

“Our government must prioritise their rights and there is now significant support in Westminster for reform.

“We will continue to push for it to ensure that long and overdue change happens.”

The visit was jointly hosted by pro-choice advocates Amnesty International UK and the Family Planning Association as part of a series of events with Westminster political parties.

Anti-abortion activists in Northern Ireland are opposed to calls for the UK government to intervene on the issue, insisting the matter should only be determined by locally elected politicians.

Ms Soubry added: “It’s ultimately the people of Northern Ireland who are affected by the restrictive abortion law there, which is why we’re in Belfast today, to listen first hand to the women, midwives and doctors who find themselves harmed and compromised by the near-total ban on abortion.”

Mr Merriman said while his preference would be for Stormont to deliberate on the issue, women should not have to wait until the current powersharing impasse is resolved.

They stated: “Northern Ireland has been without government since January 2017, we are concerned about the harm being caused to women living under the existing Victorian era legislation which makes abortion illegal in almost every circumstance.”