The family of a teenager who died after suffering an allergic reaction to a Pret A Manger sandwich have said her inquest must serve as a "watershed moment".

They are calling for a change in the law to save lives after Natasha Ednan-Laperouse, 15, from Fulham, collapsed on a British Airways flight from London to Nice in July 2016. 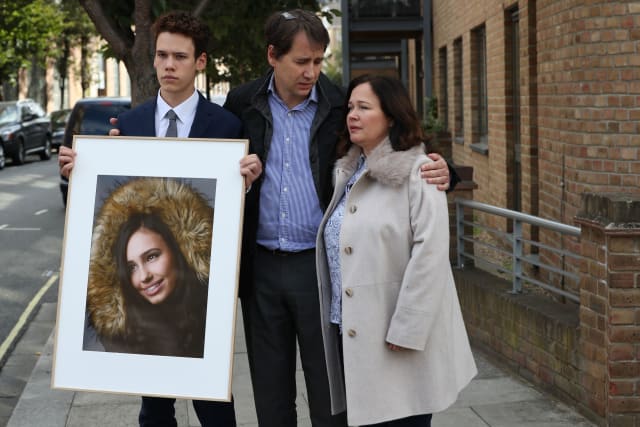 She had been on her way to a four-day break in France with her father and best friend when she bought an artichoke, olive and tapenade baguette as they passed through Heathrow Airport's Terminal 5.

Video footage released by her family shows Natasha smiling, putting her thumbs up to the camera and holding hands with her friend moments before she fell ill.

Offering his condolences to the family, the coroner said to Natasha's father Nadim: "I can't imagine what it was like for you on that plane."

Reading a statement to reporters outside court, along with his wife Tanya, 51, and son Alex, 15, who was holding a portrait of Natasha, he said they believed the inquest showed his daughter had died because of "inadequate food labelling laws".

"It feels to us that if Pret A Manger were following the law, then the law was playing Russian roulette with our daughter's life," he said.

"It's clear that the food labelling laws as they stand today are not fit for purpose and it is now time to change the law.

"Natasha's inquest should serve as a watershed moment to make meaningful change and to save lives."

The coroner said Natasha died of anaphylaxis after eating a Pret baguette containing sesame, to which she was allergic.

"There was no specific allergen information on the baguette packaging or on the (food display cabinet) and Natasha was reassured by that," he added.

Dr Cummings said he would make a report to Environment Secretary Michael Gove over whether large businesses should be able to benefit from regulation 5 of the Food Information Regulations.

The rule allows for reduced food labelling on products made in shops and does not require identification of allergens in bold labelling on the packet.

She said: "The law as it stands currently treats multinational companies in the same way as a local sandwich shop. This cannot be right."

Tom Watson, the deputy leader of the Labour Party, said large food companies have failed to show responsibility for the welfare of their customers.

"As politicians it is now incumbent on us to ensure that food retailers and producers serve their customers' interests by offering full disclosure of information on the 14 allergens," he said.

"I would hope that the industry is capable of putting its own house in order. But reality tells me otherwise.

"That is why we need to address the law on food labelling, review the cosy relationship between big corporations and their licensing authorities, and challenge the Food Standards Agency to police rather than simply administer the industry."

Pret relied on stickers on food display units highlighting that allergy information was available by asking staff or visiting the firm's website.

The coroner said that although regulators had assessed the arrangements as being within the law, he added: "I am of the view that they were inadequate in terms of visibility."

During the inquest, it emerged that a "specific warning" about the dangers of not signposting the allergen had been given to the food chain the previous year.

Pret baguettes described as "posh" or "artisan" were said to contain sesame seeds, including the one that Natasha ate.

A complaint log for the company from between July 17 2015 and June 29 2016 showed nine cases of sesame-related allergy incidents.

Four of these led to customers seeking hospital treatment, while another went to a medical centre.

More than a year after the complaint, Pret changed the design of a label within its fridges that tells customers to ask staff for allergy information.

The coroner said: "Overall I am left with the impression that Pret had not addressed the fact that monitoring food allergy in a business selling more than 200 million items a year was something to be taken very seriously indeed."

He said measures so far taken by Pret in relation to collecting information on allergic reactions and responding to serious concerns are "insufficient" and that he would make a report to the company.

The company's chief executive, Mr Schlee said: "We are deeply sorry for Natasha's death. We cannot begin to comprehend the pain her family have gone through and the grief they continue to feel.

"We have heard everything the coroner and Natasha's family have said this week. And we will learn from this.

"All of us at Pret want to see meaningful change come from this tragedy. We will make sure that it does."

Natasha suffered from numerous allergies and her father said the family "scrupulously" sought to detect and avoid allergens in the food she ate.

She had been looking forward to her "best summer ever" before falling ill when she reacted badly to the sesame seeds in the Pret sandwich.

It caused her throat to tighten and vicious red hives to flare up across her midriff, eventually triggering cardiac arrest.

Two epipens were jabbed into her legs, but the symptoms did not abate and she was declared dead the same day at a hospital in Nice.

The inquest heard that Resuscitation Council guidelines suggest 25mm is the best needle length for an injection treating an anaphylactic reaction, and that Natasha's epipens were just 16mm.

Dr Cummings said he will make a report to the Medical and Healthcare products Regulatory Agency (MHRA) and the makers of the epipens about the apparently "inadequate" length of the needle and the dosage of adrenaline in the device.

Junior doctor Thomas Pearson-Jones, who had graduated the day before, had tried to save her life along with members of British Airways cabin crew.

The coroner said not using the onboard defibrillator had been an "omission" by BA staff but said it would not have changed the outcome and praised cabin crew and Mr Pearson-Jones for their response.

A spokeswoman for BA said: "All British Airways crew receive thorough medical and safety training every six months of their flying career.

"Our crew were commended by the coroner for their 'admirable' care, as they continued working with the doctor to try to save Natasha's life during an emergency landing."