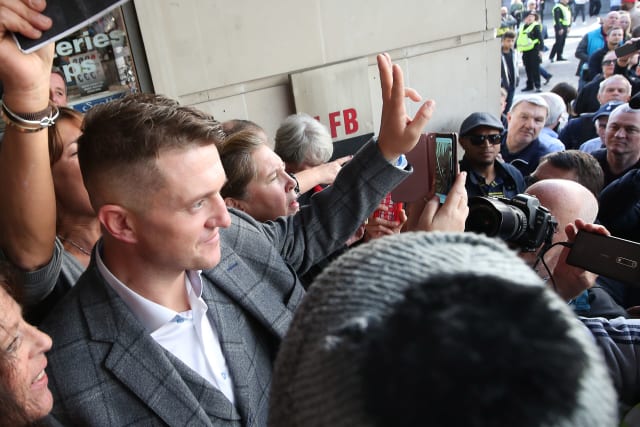 Far-right activist Tommy Robinson was cheered by hundreds of supporters outside the Old Bailey after a fresh hearing into contempt of court claims was adjourned.

But he could be sent back to jail if he is found in contempt – by filming people in a criminal trial and broadcasting the footage on social media – after new proceedings.

After a brief hearing at the Old Bailey on Thursday, video footage appearing to show Robinson at a window within the court building as crowds chanted their support below was posted on the Twitter account of Ezra Levant, a reporter for the right-wing Rebel Media organisation.

Section 41 of the Criminal Justice Act 1925 (CJA 1925) makes it an offence to photograph people within court precincts.

Robinson was earlier ushered into court amid a large police presence as supporters, holding Union and St George’s flags, chanted his name, while photographers and camera operators jostled for position.

In a Facebook live video earlier on Thursday morning Robinson said “this trial is a crock of shit” but asked if he was feeling confident, he told the Press Association: “Yeah, quietly.”

He was referred to by his real name, Stephen Yaxley-Lennon, throughout a brief hearing where he sat behind his barrister, Richard Furlong, in the courtroom, wearing jeans, black trainers, and a grey checked jacket.

The Recorder of London, Judge Nicholas Hilliard QC, adjourned the case, saying he would receive written submissions before making a ruling at a later date on whether the contempt of court hearing will take place at the Old Bailey.

Robinson was released from prison last month and granted him conditional bail from a 13-month jail-term.

He has already served the equivalent of four months in prison, but if found to be in contempt of court again could be sent back to jail – the maximum sentence is two years.

“I believe they want me in prison for Christmas,” he said.

“I want closure. I believe they are purposely not giving me closure.

“We are in the Old Bailey, the highest court in the land. The rest of the people here are on trial for terrorism and murder.

“I’m on trial for speaking into a microphone.”

Robinson was mobbed by supporters as he left court causing traffic to be stopped as he posed for selfies and chatted with fans.

Among his entourage was Gavin McInnes, co-founder of Vice and the “Western chauvinist” group Proud Boys.

Some among the crowd directed their anger at the media, verbally abusing photographers.

One woman was filmed pushing a photographer as she called him “racist” and “Christianophobic”.

Robinson was sentenced in May to 10 months’ imprisonment for contempt of court, which he admitted, and a further three months for breaching a previous suspended sentence.

In May last year he faced contempt proceedings over footage he filmed during the trial of four men who were later convicted of gang-raping a teenage girl.

A judge at Canterbury Crown Court gave him a three-month suspended sentence and told him his punishment was not about “freedom of speech or freedom of the press” but about “justice and ensuring that a trial can be carried out justly and fairly”.

They found the judge in Leeds should not have commenced contempt proceedings that day.

He added: “Where a custodial term of considerable length is being imposed, it should not usually occur so quickly after the conduct which is complained of; a sentence of committal to immediate custody had been pronounced within five hours of the conduct taking place.”

The judges dismissed Robinson’s appeal in respect of the contempt finding at Canterbury Crown Court.