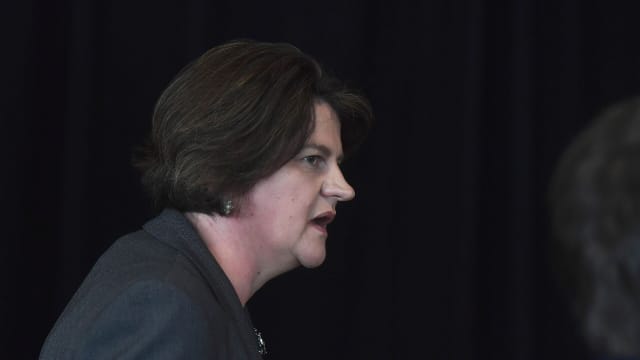 The late deputy first minister Martin McGuinness knew about a warning from a whistleblower about a renewable energy scheme, Arlene Foster has insisted.

A public inquiry into Northern Ireland’s botched Renewable Heat Incentive scheme heard evidence on Tuesday about the note which claimed people were abusing the scheme by running boilers 24/7 all year round for financial gain.

Controls to limit the scheme’s costs were not introduced and overly generous subsidies saw the taxpayer bill spike dramatically.

Questions over the Democratic Unionists’ handling of the overspending RHI scheme led to the collapse of political power sharing at Stormont early last year.

Mr McGuinness resigned as deputy First Minister in January 2017 in protest at the handling of the RHI scheme.

Mrs Foster told the inquiry he knew about the contents of the note which she received in January 2016.

She said the note was the first time she heard of the potential for fraud in the scheme, although the then head of the civil service Malcolm McKibbin had raised concerns with her over the financing of the scheme.

Mrs Foster said she had passed the note to Mr McKibbin.

“I knew that once I handed it to the head of the civil service, that it was being dealt with in the appropriate way,” she told the inquiry.

A senior Sinn Fein worker Aidan McAteer has claimed in his written evidence to the inquiry the note “was not shared” with Mr McGuinness “at that time”.

Mrs Foster queried that during her evidence to the inquiry on Tuesday, and said if she did not give it to Mr McGuinness, she spoke to him about it.

“My recollection is clear, if I didn’t show it to the dfm (deputy First Minister), I certainly spoke to the DFM about it,” she told the inquiry.

“And in any event the head of the civil service works for both myself and the deputy First minister, so I presume that the minute that was sent to Andrew McCormick… if it came into the DUP system, it would have went into the Sinn Fein system, so I would have imagined that Sinn Fein were aware of that document.”

She has contested claims by Mr Bell that others in the DUP had pushed to delay cost control tariffs and the party then tried to “fit him up” over the debacle.

“It is a great regret of mine that I didn’t remove him from the post,” she said.

“Clearly with hindsight I shouldn’t have left him there, the view was expressed to me, how much harm can he do in three months.”

The RHI Inquiry has heard claims from Mr Bell that he had a difficult relationship with some of the party’s special advisers (spads).

Mr Bell also claimed the DUP “camouflaged” how it appointed its special advisers.

Mrs Foster said the DUP is no different to other political parties in how they appointed their spads.

“I don’t think we were any different at all, if you look at the Ulster Unionists, the SDLP, certainly Sinn Fein put people into posts from their backroom team, we were no different,” she told the inquiry.

“I will say this, all of the special advisers that the DUP appointed were people who had third-level education, and who had an ability to work within the system.

“I am not sure that that can be said about every other special adviser.”