A 92-year-old whisky considered to be the world's most rare and valuable dram is going under the hammer next month.

The bottle of The Macallan Valerio Adami is estimated to fetch between £700,000 and £900,000 when it comes up for auction at Bonhams in Edinburgh.

Described by experts as "the Holy Grail of whisky", it is expected to attract the attention of some of the world's most serious collectors at the sale on Wednesday October 3.

The whisky is officially described as a 60-year-old, having been created in 1926 and bottled in 1986. 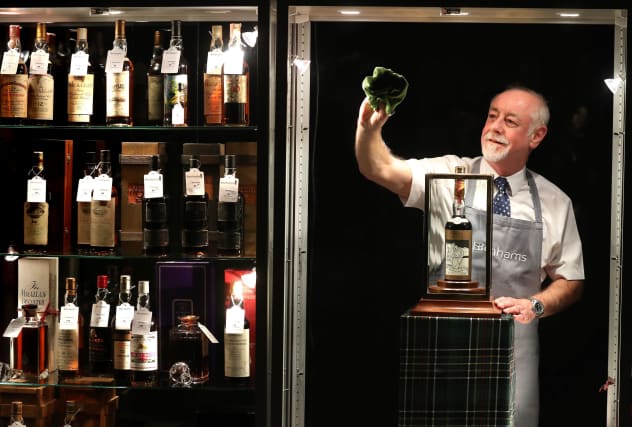 Macallan commissioned two famous pop artists, Valerio Adami and Peter Blake, to design labels for a very limited edition of 24 bottles – 12 of the Adami and 12 with the Blake labels.

Bonhams said the bottle being offered is presented in a specially commissioned cabinet, or tantalus, based on a traditional brass and glass distillery spirit safe.

It was bought by the seller direct from the Macallan distillery for an undisclosed sum in 1994.

Martin Green, Bonhams' whisky specialist in Edinburgh, said: "The Macallan 1926 60-year-old has been described as the Holy Grail of whisky.

"Its exceptional rarity and quality puts it in a league of its own, and the world's most serious whisky collectors will wait patiently for many years for a bottle to come on to the market.

"It is a great honour to be offering this amazingly rare whisky at our Edinburgh sale."

Another bottle of The Macallan Valerio Adami 1926 was sold at Bonhams Hong Kong in May for a world record-breaking price of £814,081, the most paid for a bottle of Scotch whisky at public auction.

A number of other important bottles are also being offered for sale at the Edinburgh auction next week.