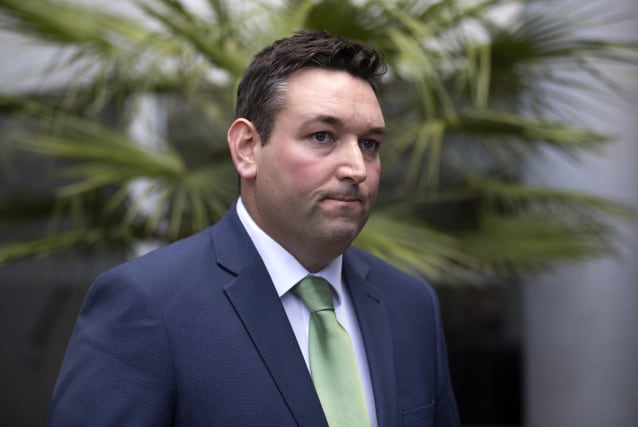 A Scottish Conservative MSP has been cleared of sexual harassment following a hearing by the party’s disciplinary committee.

Miles Briggs faced accusations that he made persistent unwanted advances to a female worker from another party on the evening of a parliamentary social event in February.

The Lothian MSP was cleared of any wrongdoing on Monday when the panel found his account of events to be “credible” and it dismissed the complaint.

Mr Briggs described the allegations as “completely false” and said he had been through “a living hell”.

The complainant said she was “gutted” by the outcome and hit out at the complaints process.

The private hearing centred around events on February 10 when the MSP and the complainant attended a reception and later a house party in Edinburgh, where Mr Briggs said he and the woman had an argument.

The woman formally lodged a complaint with the Conservatives in July, alleging conduct which she claimed had made her feel “extremely intimidated, uncomfortable and humiliated”.

The MSP denied the complainant’s version of events and he was cleared by the disciplinary hearing in Edinburgh.

The report of its findings, later released, said: “We found the respondent (Mr Briggs) to be credible in his version of events.

“The committee was unanimously of the view that this complaint should be dismissed.”

Following the hearing, Mr Briggs said: “The last two months have been a living hell for me and my family as I have had to face these false allegations of sexual harassment made against me.

“Damage has clearly been done to my character, especially among those who don’t know me, and I hope I have the chance to address that in the coming weeks and months.”

He said he was made aware of the allegations earlier this year, co-operated with the investigation and kept the matter confidential.

The MSP added that he was “grateful to the SNP parliamentary researchers who were among those who supported my case”.

He continued: “I would like to put it on record that I believe it is vital for women and men to bring forward complaints of harassment, and for those complaints to be considered with care and confidentiality. I believe the party has done that in this case.”

The charity Rape Crisis Scotland posted a statement from the woman, which said she was “sad and angry” that the disciplinary hearing process was “so terrible”.

The charity said it had “significant concerns” over how the process was dealt with.

“The woman in this case faced a process which was intimidating and inappropriate,” it said in a statement on Twitter, adding that it could not advise her to attend the hearing.

“In our view the Scottish Conservatives need to urgently change their approach to investigating sexual harassment complaints,” the organisation said.

In a statement on Twitter, Ms Davidson said: “This has not been an easy process, but the party is committed to ensuring that women and men are able to report allegations of sexual harassment to us, and maintain their anonymity as they do so.

“I have confidence in the robustness of the disciplinary process the party has put in place, that those procedures have been followed in this case, and stand by the thoroughness of its impartiality.”