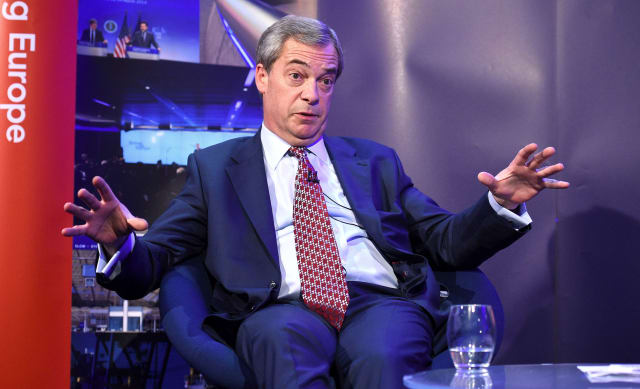 Nigel Farage has been accused of alienating high ranking members of Ukip after calling for it to back away from associating with the far right.

A speech by the Eurosceptic party leader at a gala dinner on Friday during its annual conference was met with only “polite applause”, according to a source who was present.

It came after the most high profile Ukip member sparked a row with current leader Gerard Batten by warning it faces “total and utter marginalisation” if it moves to the extremes of politics.

Mr Farage, who will share a platform with senior Tory and Labour Brexiteers at a Leave Means Leave event on Saturday, specifically said on Friday he was “upset” by the prospect of figures such as English Defence League founder Tommy Robinson being admitted into the party.

A source said that Mr Farage had repeated his warning about the party’s direction of travel at the dinner later that day and while there had been applause in the room it was less than an overwhelming outburst of support.

They said: “He (Farage) alienated a lot of high level members.”

It is also understood that Mr Farage left the dinner before Mr Batten gave his own speech to the gathered party faithful.

Mr Batten had hit back on Friday at his predecessor, suggesting he should be “a little bit more careful about criticising me” when he had himself shared platforms with right-wing German party Alternative fur Deutschland.

The Ukip leader confirmed that he would approve of party membership for Mr Robinson, and said he stood by his descriptions of Islam as a “death cult” which sanctioned the use of sex slaves.

He defended his appearance at a recent demonstration by the Democratic Football Lads Alliance, insisting “it was not an anti-Muslim rally, it was a rally for justice for women and children victims of sexual abuse”.

Following the rally, Mr Farage said Mr Batten should be careful “what company he keeps”, and on Thursday the former Ukip leader told the Press Association Ukip was “in danger now, unless it changes direction very, very quickly, of total and utter marginalisation”.