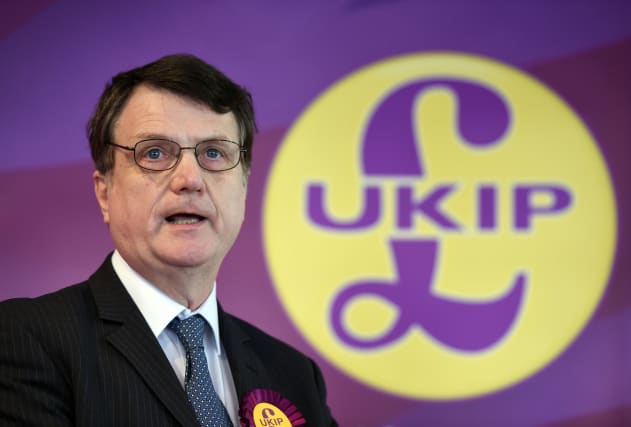 Ukip leader Gerard Batten has denied taking the party to the far right, after Nigel Farage warned it faces “total and utter marginalisation” if it moves to the extremes of politics.

As the Eurosceptic party’s annual conference kicked off in Birmingham, Mr Farage said he was “really upset” by the prospect of figures such as English Defence League founder Tommy Robinson being admitted into Ukip.

But Mr Batten hit back, saying his predecessor should be “a little bit more careful about criticising me” when he had himself shared platforms with right-wing German party Alternative fur Deutschland.

The Ukip leader confirmed that he would approve of party membership for Mr Robinson, and said he stood by his descriptions of Islam as a “death cult” which sanctioned the use of sex slaves.

He defended his appearance at a recent demonstration by the Democratic Football Lads Alliance, insisting “it was not an anti-Muslim rally, it was a rally for justice for women and children victims of sexual abuse”.

Following the rally, Mr Farage said Mr Batten should be careful “what company he keeps”, and on Thursday the former Ukip leader told the Press Association Ukip was “in danger now, unless it changes direction very, very quickly, of total and utter marginalisation”

“He is entitled to do that, because they are democratic parties, and I am entitled to speak at rallies organised by people who believe in democracy. I think maybe he should be a little bit more careful about criticising me, because he has done similar things.”

Mr Robinson would not be admitted to Ukip “in the near future” because it would require changes to the party’s rules, said Mr Batten.

But he added: “That’s something I would personally approve of, but it’s a matter for the party, it’s their decision, not mine… I don’t happen to think that Tommy Robinson is far-right.”

Mr Batten denied taking Ukip to the far right: “For the last 25 years, myself and everyone else in Ukip has worked to restore our country’s former status as an independent democratic nation that is governed by our politicians, elected by us, sackable by us, in accordance with our traditional laws and customs and constitution.

“If that makes you far right, I think whoever thinks that has got a very strange idea about what constitutes far right.”

Insisting that he was opposed to all totalitarian ideologies, he said: “If you look at any country in the world where Islam is predominant, they are either very repressive regimes or they are regimes that are in conflict internally. I think that’s something we have to be very wary of.”

He added: “The ideology of the religion does actually traditionally throughout its history make sex slaves legitimate. Their Prophet had sex slaves. It’s in the Hadith and the Koran, it’s a tradition that it’s OK to do.”

Mr Batten has said he wants to use the two-day conference in Birmingham to present the party as a true populist alternative.

He unveiled an interim manifesto including plans for an “NHS health card” entitling British citizens to free medical treatment. Non-Britons would require private medical insurance unless a post-Brexit UK had done a reciprocal deal with their government.

Other pledges include turning the UK Border Force into a “Migration Control Department” with a remit to exclude “extremist” Muslims and a five-year ban on property purchases by foreign nationals in designated areas.

Mr Batten said the package was “aimed at helping the people who form the backbone of Britain: ordinary workers and taxpayers, the unemployed who would like to work, and small and medium-sized business owners”.

He added: “Its purpose is to make Ukip a populist party in the real meaning of the word – one whose policies are popular with voters.”

Ukip’s electoral fortunes have waned since the vote in favour of Brexit at the EU referendum in June 2016.

After Mr Farage stepped down as leader after a second term in September 2016, Diane James, Paul Nuttall and Henry Bolton have all led the party for short periods before quitting for various reasons.

At the general election a year later, the party secured 1.8% of the vote, down from 12.6% at the 2015 general election, and it failed to win a single seat at Westminster.

Mr Batten will address the event at Birmingham’s International Convention Centre on Friday.

The conference will also see an address on freedom of speech by online activist “Count Dankula”, who, under his real name of Mark Meechan, was fined £800 earlier this year for filming a pet dog giving Nazi salutes and posting the footage online.