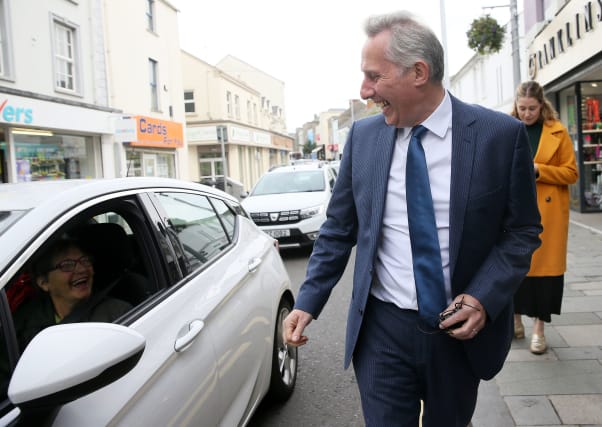 There were mixed views on the streets of Ballymena in the heart of Ian Paisley’s North Antrim constituency after an attempt to oust him from his Westminster seat failed.

Just hours after it emerged a recall petition had fallen short of the threshold required to unseat him, Mr Paisley was warmly greeted on Church Street. But others around the town expressed disappointment.

The North Antrim seat at Westminster has been filled by a Paisley for almost 50 years.

Ian Paisley has been an MP since 2010 when he successfully retained his father’s seat, winning almost 50% of the vote. Lord Bannside had held the seat since 1970.

The enduring popularity of the Paisley brand among many was clearly evident within moments of Mr Paisley emerging from his constituency office as drivers beeped their car horns at him, many giving him the thumbs up.

On a brief walkabout, the political veteran attracted a lot of attention with one car even pulling over despite traffic for the chance to shake his hand and tell him they had been up all night for news of the petition.

Mr Paisley flashed his trademark smile at the supporter and quipped: “You’re braver than me, I had a good sleep.”

Some in the town said they accepted the apology Mr Paisley made after a parliamentary watchdog found that a year after accepting luxury holidays paid for by the Sri Lankan government, he had lobbied then Prime Minister David Cameron not to support a UN probe into the country’s alleged human rights abuses.

“He did something wrong but I don’t think it was anything that others haven’t done,” she told Press Association.

Kathy Burnett said she accepted Mr Paisley’s apology and insisted he is a good MP.

“I think they should just leave things the way they are,” she said.

“I don’t approve of what he did but I think he is sorry for it and has learned his lesson.

However Jim Hughes disagreed with this, and claimed Mr Paisley had not helped him with a matter he went to him about.

“I think the man is a disgrace, he’s always flaunting himself round the country, but what does he do for his constituents?” he said.

“But he is not going to be shifted.”

Paddy Devlin said he was one of the 7,099 people who signed the recall petition.

“I am disappointed it didn’t go through,” he said.

“There were only three stations open, if more had been open it might have been different, how many would have driven from Cushendall to Ballymena to sign it.

“Paisley’s name has been there for so many years. I think he is safe in North Antrim because of his name.”