Ian Paisley readmitted to the DUP following investigation into his conduct 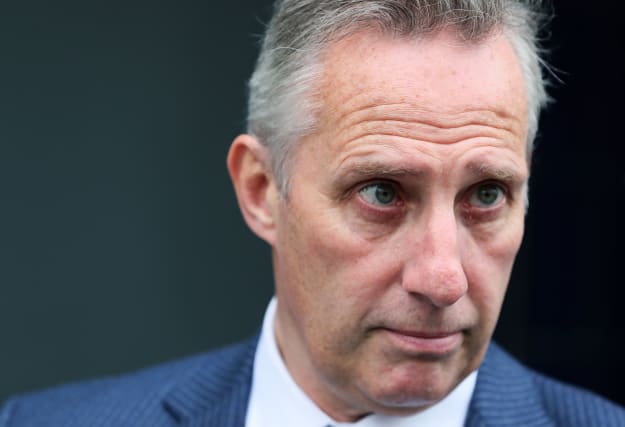 North Antrim MP Ian Paisley, who narrowly survived the first ever Westminster recall petition, has been readmitted to the Democratic Unionist Party .

Mr Paisley was suspended following a critical report by the parliamentary watchdog over lobbying on behalf of Sri Lanka after accepting holidays from its government.

His re-admittance to the party which his father helped to found was announced hours after he survived the bid to oust him.

The petition failed to attract the support of 10% of his constituents – the number required to force a by-election.

Sinn Fein’s deputy leader Michelle O’Neill criticised the decision by the DUP as a “failure” and an “effective endorsement of his actions”.

The recall petition was initiated after Mr Paisley was suspended as an MP for 30 sitting days by the House of Commons Committee on Standards.

It found that a year after failing to declare the luxury holidays Mr Paisley lobbied prime minister David Cameron not to support a UN probe into alleged Sri Lankan human rights abuses.

On Thursday, the DUP announced that Mr Paisley had been re-admitted on Tuesday but would be barred from holding office within the party for a year.

“The internal processes surrounding these matters have been completed,” a DUP spokesman said.

“On Tuesday 18th September Mr Paisley was readmitted to membership of the party following a suspension of fifty-seven days and upon re-admission he is subject to a number of conditions including a ban on holding office within the party for twelve months.

“The party will be making no further comment on these matters.”

“The DUP has effectively endorsed a gross lack of integrity in public office by accepting Ian Paisley back into the party with only a minor sanction,” she said.

“There was no hint of an apology from the DUP. Instead, he has been welcomed back into the DUP fold.

“That represents another failure on behalf of the DUP and is an effective endorsement of his actions.

“The DUP failed to take the appropriate action, which would have been to sack Ian Paisley.”

Speaking to the Press Association in Ballymena on Thursday morning, Mr Paisley said he wants to move on.

Mr Paisley said he felt “humbled and privileged” and also hailed his family and “true friends” for sticking by him.

He also revealed he has made three complaints to police over allegations electoral law was broken over the failed recall petition.

There are rules over what can be said or published during the six weeks the petition is open, which if broken can carry potential fines and prison terms.

Mr Paisley said: “A number of people have breached section 124 of the election law and I have raised at least three specific complaints about individuals with police.

“It’s up to police now to take that forward. I know if I had breached the law in that way, the same people would be asking questions.”

He said: “I do not believe there was anything in the post that predicted the outcome of the petition.”