Victims of The Troubles call on support from Republic of Ireland 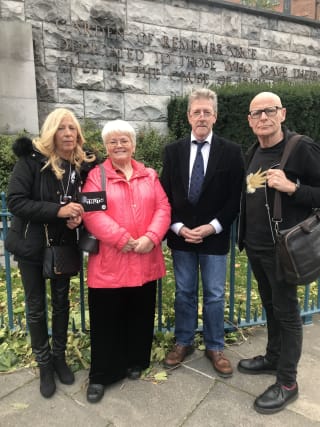 The families of victims murdered during some of the worst atrocities in Northern Ireland have come together to call for support from the Irish Republic in their search for justice.

Representatives from the Bloody Sunday families as well as Miami Showband survivor Stephen Travers said they want the backing of people from the Republic of Ireland in the quest for answers into the atrocities, describing it as a “32-county” matter.

They also raised concerns over new Garda Commissioner Drew Harris, who is a former Deputy Chief Constable of the Police Service of Northern Ireland (PSNI).

Speaking at a meeting in Dublin on Wednesday, Kate Nash, 69, whose brother William was murdered and father Alex wounded on Bloody Sunday in Londonderry in 1972, said now is an important time to get support from across the island of Ireland.

Prosecutors have been examining files of evidence against ex-British soldiers who were on the streets of Londonderry when the Parachute Regiment shot and fatally wounded 14 civil rights demonstrators.

The families of those who were killed will soon be told whether former British soldiers will be brought before a court.

Ms Nash said: “We are pursuing justice for my brother Willie and for my father because he suffered a lot. We need to get justice, I’m almost 70 now and I have this great fear, not of death, but that I die before I see British soldiers in court.

“We want to bring this to Dublin because there are a few things that concern me. Drew Harris’ appointment concerns me because he has association with MI5.

“I’m concerned he has now moved to the Free State and I worry how the judicial system will work with someone like him here, and I want to ask people across Ireland to support us because we are at an important time to get support and we need to keep the pressure up so the British Government know we won’t give up.”

Miami Showband massacre survivor Stephen Travers said that he will ask Mr Harris to hand over information into the murders carried out by the Ulster Volunteer Force (UVF).

His three fellow band members were shot dead in 1975 after a gig in Banbridge in Co Down.

There have been allegations of collusion between the authorities and loyalist terrorists in the lead-up to the massacre after State Papers revealed that British intelligence agency MI5 had supplied the UVF with detonators.

The loyalist group had planned to plant a bomb on the musicians’ bus and have it explode as they drove home, however two UVF men were killed by their own bomb as it detonated before they could plant it in the back of the band’s vehicle.

Mr Travers, 67, said that, as Garda Commissioner, Mr Harris can hand over “vital information” into the killings.

He said: “In my experience of policing in getting to the truth, I am no longer sure who the good guys are. They are blocking the truth and are working against us.

“I am suspicious of Mr Harris’ recent appointment because of his previous roles in the PSNI and RUC (Royal Ulster Constabulary).

“It was his office that blocked our access to records that are important in our civil action. I do think it’s a double-edged sword – we questioned whether Gardai had vital information in our case now we know they have.

“We will ask for his assistance in uncovering information that we were looking for and I can’t see how he will refuse that.”

Family members of those killed in the 1971 Ballymurphy massacre and who died in the Stardust fire in Dublin in 1981 were also at the public event.

Families of those who died in the nightclub fire have been campaigning for a fresh inquest into the deaths.

Antoinette Keegan – who survived the fire but lost her two sisters, Mary, 19, and Martina, 16 – said the families would never give up campaigning.

Journalist and political activist Eamonn McCann, who also spoke at the event, said that many people in the Republic regard The Troubles as a Northern Ireland problem.

“There were 34 people from the Republic who were killed and that’s hardly remembered,” he said. “It’s forgotten whereas in the North there’s an obsessional memory.