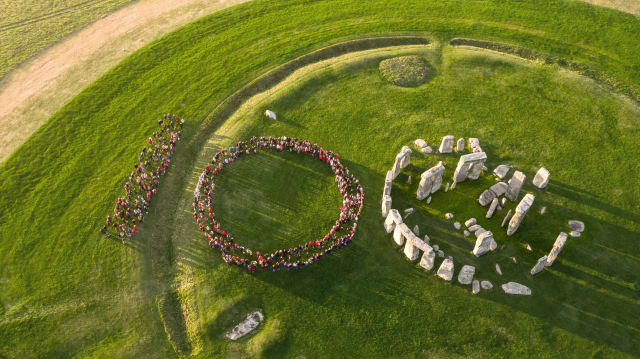 Members of the public are being asked to share their old photos of Stonehenge as the world-famous monument celebrates a century of belonging to the nation.

To mark the 100-year milestone, English Heritage invited a number of individuals and families to return to the Neolithic site they visited decades ago and recreate the photos from earlier trips.

The visitors were given special access to the stones to recreate as closely as possible, with family members, the snaps from the 1950s, 1960s and 1970s for the “then and now” shots.

English Heritage, which looks after the stone circle, hopes the pictures will inspire other people to go back through their photo albums and share their old pictures of the monument, and even those taken by their ancestors.

The images will form part of a digital photo album “with a difference” marking 100 years since local barrister Cecil Chubb and his wife Mary donated the monument to the nation.

Mr Chubb had purchased the site three years earlier at an auction on September 21 1915, in an “impulse buy” after he had been sent to the sale by his wife to bid for a set of dining chairs.

When Lot 15 at the Palace Theatre auction in Salisbury came up – described as “Stonehenge with about 30 acres, 2 rods, 37 perches of adjoining downland” – he bid because, he said: “I thought a Salisbury man ought to buy it, and that is how it was done.”

To recreate the then and now pictures, special trips were made by several former visitors including American Taney Roniger, who was only three-years-old when she first visited Stonehenge in 1971 with her parents, and was photographed with her father leaning against one of the stones.

The image was recreated almost 50 years later, with her and her husband posing in the same spot.

She said she remembers “a feeling of vastness at the stones” on her first trip and of peace, “not least because America was so troubled at the time because of the Vietnam War”.

And she said: “Returning to Stonehenge after all those years was really special.

“The stones were overwhelming, I had the sense that they were bigger even than my first visit, and it felt like my parents were with me.”

Helena Myska, whose family had emigrated three years earlier from Czechoslovakia, stopped at Stonehenge on the way to Cornwall in 1971 when she was nine-years-old and her sister was four.

Of her return, she said: “Recreating the photo was emotional and makes me realise how many years have gone by – we’re not the same people, we all look so different  – but Stonehenge has been here so long and in that context the time between the first photo and this one is so short.”

Kate Davies, English Heritage’s director of Stonehenge, said: “People have been visiting Stonehenge for centuries and since the nineteenth century, people have felt compelled to take photos of themselves and their loved ones in front of the stones.

“But rather than lying forgotten in a dusty old photo album or on a memory card, we want people to share with us their photos of Stonehenge and help us to create a photo album with a difference.

“Stonehenge is an important place in many people’s memories, and each and every person who has visited the monument is part of its story.

“This archive is a way of making us all part of the ongoing history of this incredible place.”

Cecil and Mary Chubb formally donated Stonehenge to the nation on October 26 1918 and English Heritage is inviting people to join them at the stones on Friday October 26 2018 and over the weekend for celebrations.

People can share their or their ancestors’ pictures of the monument and see other images by visiting www.stonehenge100.co.uk.