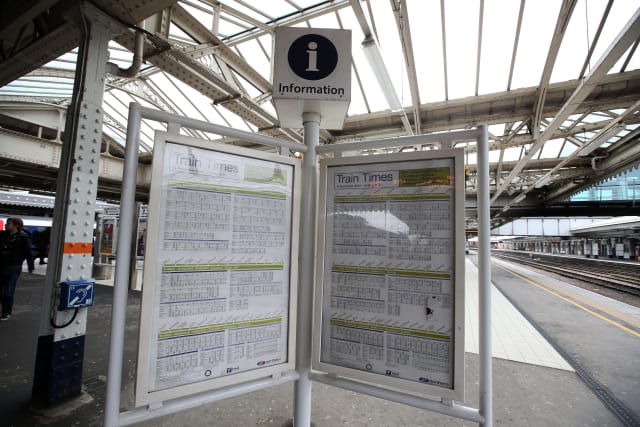 A major review of Britain’s railways has been launched as an investigation into what caused the May timetable disruption found “nobody took charge”.

The Government said the review will be “the most significant since privatisation” and will consider all parts of the sector, including accountability, the franchising system and value for money for passengers and taxpayers.

An investigation by the Office of Rail and Road (ORR) regulator into the May timetable change concluded Network Rail, Govia Thameslink Railway (GTR), Northern, the Department for Transport and the ORR itself all made mistakes.

The inquiry’s interim report warned of a “lack of clarity about roles and responsibilities”.

It added: “The present industry arrangements do not support clarity of decision making: it was unclear who was responsible for what.

The May 20 timetable change was intended to deliver huge benefits to passengers as a result of major upgrades to the network, but instead saw services crippled in the north and south-east of England.

GTR and Northern cancelled up to 470 and 310 scheduled trains respectively each weekday during the disruption, which lasted several weeks.

The ORR stated: “The impact of this experience has had a significant financial and emotional cost to those passengers affected, directly impacting upon their work and families and in some circumstances their personal safety.”

The regulator’s 183-page report catalogued failures by various organisations which led to this outcome.

– Delays with Network Rail’s electrification work in the North;

– Network Rail’s unit responsible for producing timetables did not have a sufficient method of working to manage the scale of changes required;

– GTR and Northern were not “properly aware or prepared” for the problems with the new timetables and did not do enough to provide accurate information to passengers when disruption occurred;

– The DfT and ORR failed to sufficiently examine the assurances they received from the industry about the risk of disruption.

Events and decisions taken before January meant it was “probably unavoidable” that the launch would fail, according to the report. If there was a final go/no-go decision point it was in autumn 2017.

ORR chairman Professor Stephen Glaister, who led the inquiry, said: “Good intentions and over-optimism within the rail industry about its ability to recover missed deadlines left no time to uncover and fix problems.

“When problems arose, timetable planners were stretched and train operators were ill-equipped to help passengers.”

The rail review commissioned by the Government will be led by Keith Williams – deputy chairman of John Lewis and former chief executive of British Airways – who will be supported by an external panel.

A White Paper will be published next year after Mr Williams publishes his report. Reforms are expected to be implemented from 2020.

He said the industry is facing “significant challenges”.

Punctuality is at a 12-year low and commuters face an increase of up to 3.2% in the cost of season tickets from January.

There is also scepticism over the franchising system following the failure of Virgin Trains East Coast.

These issues have fuelled calls for the entire network to be taken into public ownership.

He accepted that the railway “needs reform to prioritise its passengers” and noted plans for closer partnerships between track and train operators on the East Coast and South Eastern routes.

He went on: “We need to go further and more quickly, to get the best from the public and private sectors, and deliver the railway we need for the 21st century.

“It is vital that this review leaves no stone unturned and makes bold recommendations for the future.”