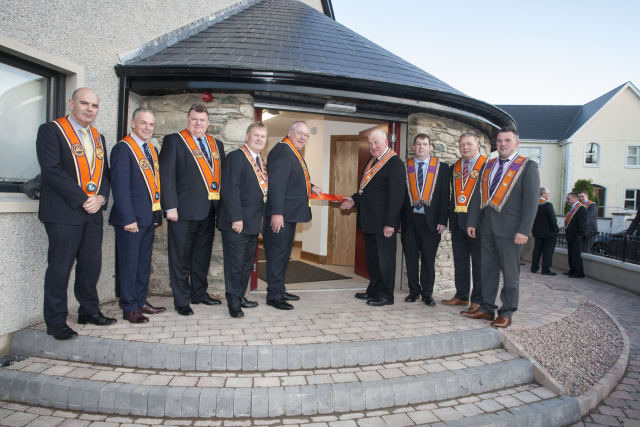 A restored First World War memorial damaged when an Orange Hall in Co Donegal was destroyed by arsonists has been unveiled in the newly rebuilt property.

A ceremony to mark the opening of the refurbished Newtowncunningham Orange Hall has been held exactly four years on from the blaze that gutted the building.

The memorial tablet dedicated to Donegal Orangemen who died in the 1914-18 conflict was repaired as part of the restoration project. A Bible, which was found among the charred debris, has also been saved and reinstated in the new-look hall.

The project was supported by funding from the Irish Government

Brethren from Newtowncunningham True Blues LOL 1063 were joined at a dedication service by senior Orangemen.

Newtowncunningham Deputy Master, Stewart McClean, said he was delighted with the new building, and extended his thanks to the Dublin government.

“The opening of our new hall is a tremendous accomplishment for all those associated with this substantial rebuild, and is a defining and historic moment for our lodge,” he said.

“The upgraded property has been built for use by the local community and will be utilised not only by the lodge and accordion band, but also a range of groups and organisations in the area. We are confident the hall will be a wonderful asset for east Donegal for generations to come.”

The new hall is larger and better equipped than its predecessor. There are also plans to incorporate a small museum inside the facility.

“It is tremendous to see this community facility rise again from the ashes and fully restored to its former glory,” he said.

“Its renewed and improved presence is testament to the fortitude and resilience of the Protestant and Orange fraternity in the Donegal area.

“The lodge has a proud military heritage, most notably during the Great War, and therefore it is particularly fitting that such a redevelopment occur in this, the centenary year of the Armistice.

“The new hall will stand as not only a tribute to those former members, but also in its everyday operation will provide a lasting legacy for future generations.”

Pandemic picked as word of the year

UK retailer Debenhams to be liquidated

UniCredit CEO steps down in clash with board