Female pedestrian killed as lorry crashes into side of house 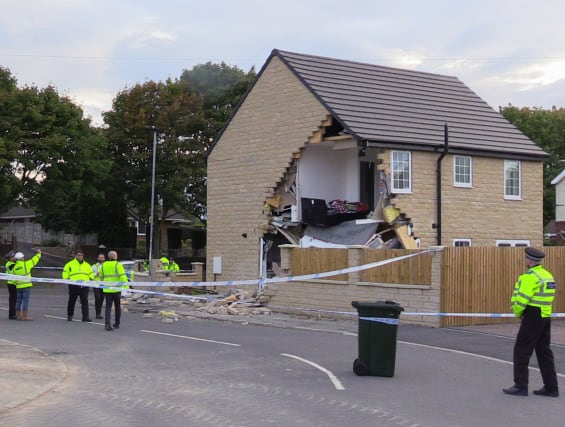 A female pedestrian has been killed following an incident in which a lorry crashed into the side of a house.

Police at the scene on Park View in Brierley, Barnsley, confirmed on Friday that the woman had died after the collision.

Officers added that four men had been arrested and that the white tractor unit had been “involved in crime” before the crash.

They would not confirm reports from nearby residents that the truck had been followed by police beforehand.

A spokeswoman for South Yorkshire Police said officers had been called to the scene at about 1.40pm.

A large area remained cordoned off around the newly-built house, which has suffered severe damage at the back, with beds and other household items hanging precariously from the wrecked gable end.

People living close to the scene of the collision said they were alerted by a loud bang.

They said the tractor unit also crashed into a number of parked cars as it drove along Common Road before swerving into the semi-detached house at the corner of that road and Park View.

Residents said the woman who died was also on Common Road as the truck entered the village, which is about six miles from Barnsley.

People who gathered to watch a large number of police, engineers and gas contractors working at the scene said police cars were at the scene very quickly and men were seen leaving the cab of the tractor unit and running away.

They said no-one was in the house at the semi-detached home which had only been built in the last six months. Some of the people who lived in the property returned shortly after the crash to find their new house wrecked.

One man, who did not want to be named, said: “It’s come and hit two cars and then just crashed right into the house.

“It hit the woman near the cars and it’s just terrible.

“The police were following it and it was obviously going too fast.”

Another man said: “I was standing outside that house earlier. I just can’t believe it.”