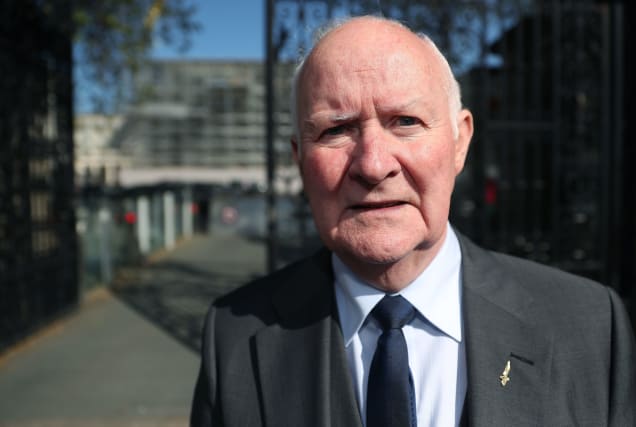 A man thrown from a British military helicopter during the Troubles has warned that a failure to declare his treatment as torture has given a legal all-clear for brutal interrogation tactics around the world.

Liam Shannon said the European Court of Human Rights (ECHR) had made an “awful mistake” by rejecting an Irish government appeal against a ruling that found the UK did not torture him and 13 other men interned without trial in the early 1970s.

The so-called Hooded Men claim they were subjected to a number of torture methods when they were detained without trial at a British military camp in Northern Ireland in 1971.

These included five techniques – hooding, stress positions, white noise, sleep deprivation and deprivation of food and water – along with beatings and death threats.

Mr Shannon says his experience began by being hooded and thrown from an airborne helicopter, which it transpired was only a short distance from the ground.

“If there is such a place as hell, I was there for seven days,” he said.

Earlier this year, the ECHR dismissed the Irish government’s request to find the men suffered torture and said there was no justification for revising an original judgment in 1978 that held that while the men suffered inhumane and degrading treatment, they were not tortured.

The Irish authorities took the case to Europe after highlighting what they said was fresh evidence.

An attempt to appeal March’s ruling – by having it heard in the court’s grand chamber – was rejected on Tuesday, bringing to an end the Irish state’s legal challenge in Europe.

Mr Shannon said a failure to reverse the 1978 judgment had given carte blanche for the use of similar controversial stress techniques across the globe.

“In countries all over the world people were trailed out and tortured and murdered, and they did it in the name of the judgment between Ireland and the United Kingdom,” he said.

“If that judgment had have been rectified they wouldn’t have been able to do it.”

Mr Shannon, who was a 23-year-old father of three when he was brought to Ballykelly military base in Co Londonderry for interrogation in 1971, said he still suffers flashbacks.

“Had this been carried out by a bunch of squaddies, or a bunch of rogue RUC men, you probably could have accepted that but this was cleared at the highest echelons of government,” he said.

“It wasn’t just done on a whim, it was well thought out, it was well contrived and they knew exactly what they were doing.”

Sinn Fein senator Niall O Donnghaile said the men’s legal campaign would continue in the form of a challenge in Belfast aimed at identifying those responsible for the events of 1971.

“The key message that I would like to convey is the men weren’t broken despite having been tortured in 1971 and they won’t be broken as a result of yesterday’s decision either,” he said.

He said the ruling had “live global implications”.

“That’s why these men aren’t just determined in terms of truth and justice just for themselves,” he said.

“They know that what has been inflicted upon them has been used as a flag of convenience for people to carry out the same and indeed worse in other countries around the world.”

In March, the ECHR said new material presented by the Irish government had not demonstrated the existence of facts that were not known to the court at the time or which could have had a decisive influence on the original judgment. The ECHR dismissed the appeal by six votes to one.