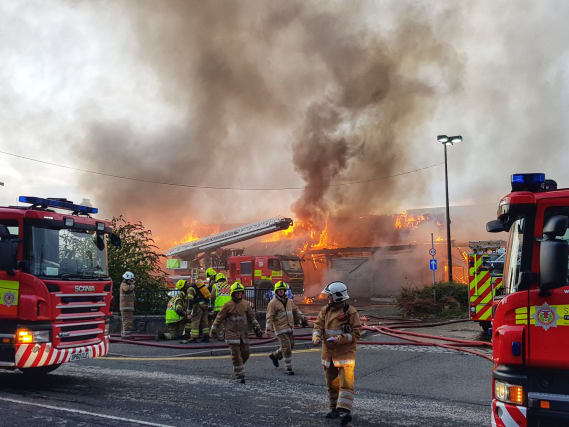 A large blaze has ripped through an indoor market and forced the evacuation of nearby buildings, in Dundee’s second major fire in fewer than 24 hours.

Witnesses reported seeing walls collapsing and Police Scotland confirmed it was heavily damaged, while more than 60 firefighters were working to tackle the flames.

The incident at Hilltown Indoor Market is the second largescale fire in the city in less than a day, with Braehead Academy currently shut after a blaze on Tuesday evening.

Dylan Drummond claimed hundreds of onlookers were at the scene.

“There’s smoke, it’s a clear sky, you can really see it from far away, the stink is horrendous.

He added: “A building fell down, looked like the fire brigade were hosing it down.

“The flames are mental, it looks like the whole building’s on fire.”

Emergency services were called to the scene shortly before 6.15pm on Wednesday.

The blaze began in the roof of the building before spreading.

Nine pump appliances are in attendance, as well as a command support unit and an incident support unit.

The neighbouring Fit4Less gym was evacuated, although a Scottish Fire and Rescue Service (SFRS) spokeswoman said there have been no reports of injuries.

A spokesman added the building had “more or less collapsed”.

It is understood the market has been out of use for some time.

Meanwhile, Dundee City Council said it is determined to minimise disruption to the education of the 570 Braeview Academy pupils but they will have to remain at home into next week.

More than 50 firefighters worked through the night to tackle the blaze, which broke out at the school at around 9.40pm on Tuesday.

No-one was injured and police will now be carrying out a joint investigation with the Scottish Fire and Rescue Service.