The rappers using ‘gospel drill’ to save youths from street violence 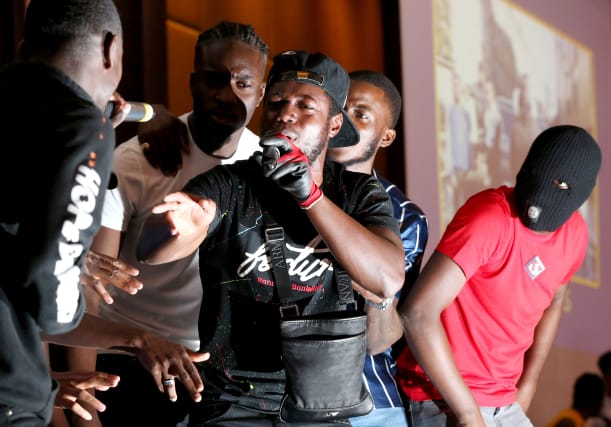 Former gang members have fused drill music with the gospel to try to rescue youths from violence and drugs.

Every Sunday, an outfit called Hope Dealers rap about redemption and salvation to a crowd of more than 1,000 church-goers from the SPAC Nation church in London.

The group delivers high-energy performances to the congregation at the Riverbank Plaza Hotel in the centre of the capital between sermons and testimonials from members wearing urban clothing such as hoodies and balaclavas.

Nathan Oki, who grew up in Peckham, south-east London, and whose best friend was stabbed to death when he was just 15, said mixing drill with Christian messages helps them reach troubled youths.

The 28-year-old, now a pastor with SPAC Nation, told the Press Association: “At about 13 or 14 I really started to be a product of my environment. I’m talking about broken homes, anger, poverty … from there life took a downward spiral.

“Having friends stabbed and losing people can become normalised in one’s eyes. You get to a point where you begin to accept it.

“For many of us we’ve had to have someone grab our hand and say ‘Come, here’s a different route’. But without that you’re just thinking ‘How do I survive in this jungle?’”

The group, whose tagline is “Dealing hope to the lost”, has racked up hundreds of thousands of online views with slickly-produced promo videos and says its message has helped turn lives around.

A pastor and member who wanted be known only as Alex gave the example of a gangster who had been jailed seven times but now operates a successful chauffeur business.

Pastor Alex, 22, whose friend was fatally knifed in 2013, said many youths in London suffer from thinking that their only path out of deprivation is criminal.

He said: “When you grow up here it’s either: you play football, you rap, or you sell drugs or do fraud or you go to work – but you don’t want to go to work because you’ve seen your mum and dad struggle.

“Your scope is already small in life. What we try and do is take them out of that scope and expose them to the opportunities of life.”

The group is sceptical that lyrically violent drill music is fuelling knife crime in the capital after it was accused of doing so by senior judges and figures like Metropolitan Police Commissioner Cressida Dick.

Unlike some forms of the genre which can feature aggressive lyrics and threats to rival groups, the Hope Dealers’ brand of drill mixes messages about God with social commentary and a wry sense of humour.

In a session on BBC Radio 1Xtra that has been viewed 75,000 times on YouTube, one verse features the lyric: “Giving your soul to the war for the money but you’re still in council estates.”

Another, from the song Levels, is lighter in tone: “This truth’s so loud/I can’t really hear you/I’m not trying to see the dark side/I’ve got a curfew.”

Oki said: “A lot of the drill music that you see is just a mirror reflection of somebody’s life, which is the life I was living. It’s an expression. Without that music the behaviour still continues.

“Much hasn’t changed at all in terms of how crime has played out. I think what is changing is the media coverage … but in terms of the violence nothing much is changing.

“It’s about looking at what’s happened prior to the music that’s causing these young men to behave in a manner like this.”

Alex added: “Even back in the day before there was drill, rappers were still speaking about the exact same thing. Drill stems out of the root problem.”