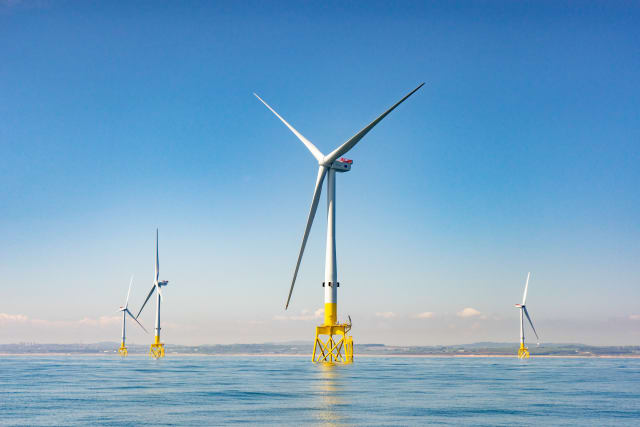 A “groundbreaking” offshore wind farm that faced opposition from Donald Trump has been officially opened by Scotland’s First Minister.

Vattenfall’s European Offshore Wind Deployment Centre (EOWDC) off the coast of Aberdeen exported to the national grid for the first time in July.

Two of its 11 turbines are said to be the most powerful in the world, generating enough energy with a single rotation to power an average home for one day.

The wind farm, situated around 1.5 miles from the shore, is expected to produce enough electricity to meet the demand of almost 80,000 homes a year.

More than 100 business leaders and dignitaries joined Nicola Sturgeon and staff from Swedish-owned Vattenfall at an opening ceremony on board a NorthLink Ferries vessel on Friday.

Ms Sturgeon said: “I am proud that as part of this groundbreaking project, the world’s most powerful offshore wind turbines are now up and running in Scotland.

“The European Offshore Wind Deployment Centre will maintain Scotland’s reputation for innovation in low-carbon and renewable energy development and deployment.

“A single rotation of one of these 8.8mw turbines will generate enough energy to power a home for 24 hours, which truly shows the potential of this technology to strengthen Scotland’s renewable energy-generating capacity in the future.”

The 11 turbines include two 8.8 megawatt (mw) turbines standing 191 metres tall, which are the most powerful operating anywhere on the planet.

The project has a total capacity of 93.2mw, enough to meet the electricity needs of 70% of households in Aberdeen, industry association RenewableUK said.

The first of the turbine foundations was installed in the seabed in March, with the final turbine put in place at the end of May.

It was connected to the national grid after the laying of more than four miles of high voltage underground cable between Scottish and Southern Electricity Networks’ substation in Dyce and the wind farm’s onshore substation at Blackdog.

The project had faced delays, including a court challenge by Mr Trump, who claimed the turbines would ruin the view from his golf course at Balmedie.

Speaking to the crowd gathered for an inauguration ceremony on the deck of the ferry, Ms Sturgeon added: “I think it’s fair to say it’s had its opponents along the way.

Ms Sturgeon and Vattenfall president Magnus Hall together pressed a button following a countdown to declare the EOWDC open.

Mr Hall said: “The innovation we have implemented at the EOWDC – and will continue to demonstrate – will turbocharge the growth of a global, low-cost offshore wind industry. And in doing so, do much to secure a fossil fuel free future for us all.”

Claire Mack, chief executive of Scottish Renewables, said: “This project is significant on a global stage. The developments and research which are taking place in Aberdeen place Scotland at the very forefront of offshore wind innovation and cement the city’s reputation as an energy powerhouse.

“The supply chains which have come together on projects like the European Offshore Wind Deployment Centre, and others including Beatrice and Moray East further north, are already revitalising coastal communities.

“With 25% of Europe’s offshore wind resource, the deployment of technology like these turbines – the most powerful in the world – presents an enormous opportunity for Scotland.”