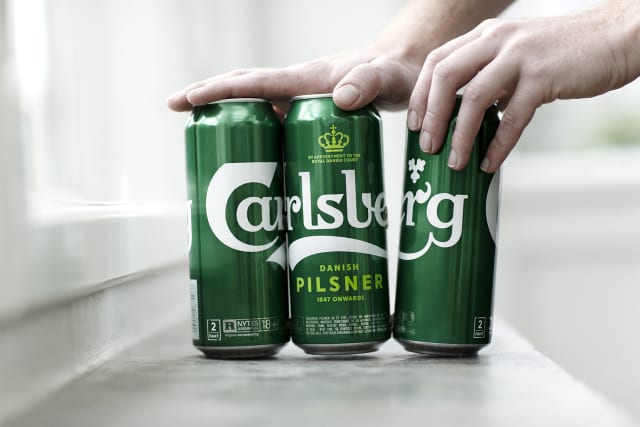 A leading beer company has come up with a sticky solution to the environmental damage caused by six-pack rings and wrapping.

In what it is heralding as a world-first, Carlsberg’s new multi-pack beer cans are held together solely by glue – a move that is set to reduce the Danish brewer’s use of plastic to package the product by more than 75%.

After a three-year development process, which involved testing more than 4,000 different adhesive formulations, the company insists the dots of glue bonding its new “Snap Packs” are strong enough to withstand the journey from shelf to home, yet sufficiently brittle to break when twisted.

British beer fans will be the first to test this pledge as Carlsberg has chosen the UK market, which consumes 30% of its beer annually, to debut the eco-friendly packaging innovation.

At an official launch event in Copenhagen, inventor Christopher Stuhlmann revealed how a trip to his local DIY store helped convince him that his brainwave could become a reality.

“The starting point was going to a hardware shop and buying all the adhesive I could get, all the glue that was there,” said Mr Stuhlmann, who works for one of Carlsberg’s design partners.

“Over the weekend I just glued things together and made a short video for my CEO and so the idea was born.”

The technology has the support of the World Wildlife Fund (WWF), which has hailed it as a “big step” in efforts to tackle the worsening global scourge of plastic pollution.

To mark the launch, the brewery unveiled a replica of Copenhagen’s famous Little Mermaid statue – an artwork originally donated by Carlsberg’s founders, the Jacobsen family – made from the new Snap Packs.

Head of sustainability at Carlsberg, Simon Boas Hoffmeyer, said once the Snap Packs are rolled out worldwide the company will reduce its plastic use by 1,200 tonnes a year – the equivalent of 60 million plastic bags.

“It’s a little bit of magic,” he said of the design.

“It’s glued together so you can’t actually see the packaging. It’s almost not there, and that is what is extremely exciting from a sustainability perspective.”

Bo Oksnebjerg, secretary-general of WWF Denmark, said the issue with traditional multi-pack rings was particularly serious, given their potential to trap animals and birds.

”Our wildlife is drowning in plastic – and the problem is unfortunately growing considerably,” he said.

“We therefore need to act now. We need less plastic to end up in nature. That is why we consider it huge progress that Carlsberg is now launching solutions that significantly reduce the amount of plastic in its packaging.”

“We do believe if we are serious about our concerns about the environment then we just need to innovate in an open way.”

Vice president of product development at the brewery, Myriam Shingleton, said she wanted the glue to become the new packaging norm.

“It’s a global problem and we are very happy we are at the front end to propose that,” she said.

“As always in Carlsberg we will not keep this for ourselves.

“I’m sure other players will follow when they see that – and that’s a very exciting journey if more and more players are coming.”

The glue technology was one of a series of sustainability innovations launched by the brewer in its headquarters in the Danish capital.

It also showcased beer bottle labels made from recyclable ink; a coating technique to extend the lifespan of its refillable glasses bottles; and new bottle tops that absorb the oxygen trapped in the neck of the bottle, in a development designed to make the product stay fresher longer.

The series of environmental initiatives is part of the company’s drive to reduce both its carbon footprint and waste water output to zero in the coming years.