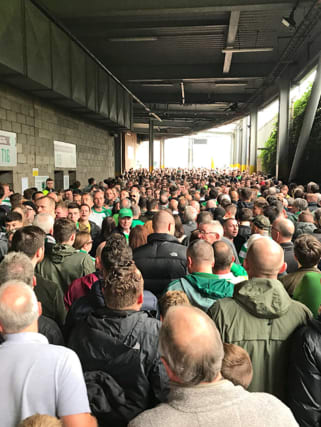 Police have held “constructive” talks with Celtic chiefs after a crush before the first Old Firm game of the season saw fans requiring treatment.

Celtic has apologised for the incident in Janefield Street at Parkhead before Sunday’s match against Rangers as fans tried to get into the stadium before kick-off.

Police Scotland said one person was taken to hospital after falling from a wall while four others were treated by first-aiders at the scene.

The force said it has found no evidence to support suggestions that the gate on Janefield Street was closed at any time in the lead-up to kick-off.

Police said that officers and stewards acted quickly to stop more people entering Janefield Street and that without their actions the outcome could have been “far more serious”.

He said: “The meeting which was held today was very constructive. There were a number of points discussed and actions which will be taken forward.

“Later this week I will meet with representatives from Celtic FC supporters clubs regarding any concerns they may have.

“I am aware of a lot of conflicting information being circulated regarding what took place on Sunday.

“I can confirm that having carried out a comprehensive multi-agency debrief today, we have found no evidence to support suggestions that the gate on Janefield Street was closed at any time in the lead-up to kick-off.

“I would like to reiterate that the safety of people attending football matches remains the absolute priority for Police Scotland.

“In realising that the area was becoming overcrowded, officers and stewards acted quickly to stop further people entering Janefield Street, which was in line with our tried and tested plans for this type of situation.

“Had it not been for their actions there could have been a far more serious outcome and I am grateful to them for the professional manner in which they responded.”

He said that police will continue to work with Celtic and with the supporters to learn from events on Sunday and to improve future policing and stewarding operations.