Artefacts found at royal palace date back more than 800 years 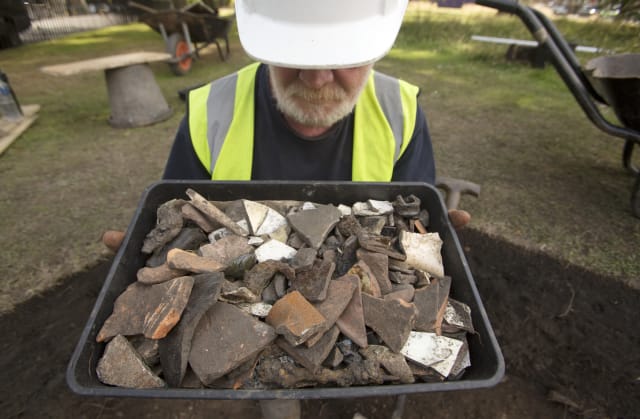 Artefacts dating back more than 800 years have been found at the Palace of Holyroodhouse.

Items discovered during excavation work in Edinburgh this year include a 12th-century jug fragment, a horse skeleton and a medieval shoe.

The diets of ambassadors and courtiers at Abbey Strand – during the reigns of Mary, Queen of Scots and James VI – were also revealed by the mass of oyster shells and wine bottles dug up.

Researchers also say wine and spirit containers, food debris and fragments of children’s games give a glimpse of life for the 25 impoverished families living in cramped tenements in the area during the 18th and 19th centuries.

Gordon Ewart of Kirkdale Archaeology, which carried out the work, said: “The survey has provided a unique opportunity to understand more about the fascinating development of the Abbey Strand and its surroundings – and to explore how the site has been the historic and symbolic bridge between the palace and the city of Edinburgh for centuries.”

More than 40 trenches were dug for an archaeological survey as part of the £10 million works to improve the visitor experience at the palace.

Excavations in the Abbey Strand buildings by the Edinburgh-based firm uncovered the earliest evidence of settlement on the site.

Timber posts dating from the 12th century are believed to mark the location of a terrace that led to the then low-lying island on which Holyrood Abbey was built in 1128.

They could also have formed part of a structure used by the workmen who built the Abbey.

One of the earliest finds is a medieval leather shoe from beneath one of the cellars in the Abbey Strand.

The bones of Highland cattle found in the gardens provide evidence of trading between Edinburgh and the Highlands and Western Isles.

The palace is used by the Queen when carrying out official engagements in Scotland.