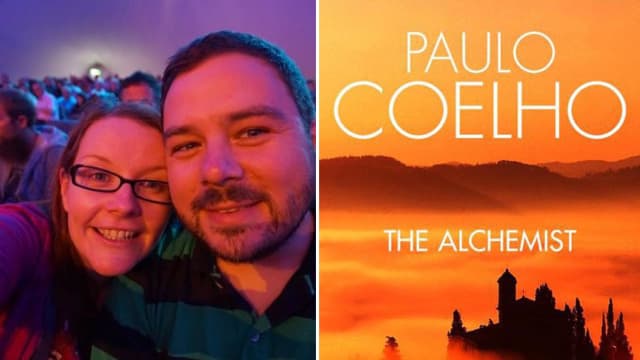 A widow has appealed on Twitter for help finding a book carrying an inscription from her late husband that accidentally ended up in a charity shop.

Ali Payne's search to find her treasured copy of Paulo Coelho's The Alchemist even received a boost from Scottish First Minister Nicola Sturgeon who retweeted the appeal saying "wouldn't it be wonderful if this special copy of a special book could be tracked down".

Mrs Payne described the appeal as a long shot but explained why it was such an important copy of the novel.

Her husband, Jude Payne, passed away nearly three years ago aged 41 when their children Thomas and Rachel were six and five.

Mr Payne gave her the novel in 2003, the year they got together, but mistakenly took it to a recycling centre in Seafield, Edinburgh, when they prepared for a house move in 2010.

She knows books taken there are distributed to charity shops.

The 39-year-old, who lives in Portobello, Edinburgh, decided to take her search public after finding a children's book in a charity shop which also carried an inscription.

It got her thinking once again about her missing book and the message, which she can no longer recall.

"After I paid for it (a Winnie The Pooh book) I noticed it had an inscription from a daddy to his daughter on her eighth birthday. My daughter's eighth birthday was in July. It was hard to see," she told Press Association.

"I wrote an inscription on it from me, but thought it was also meant to be.

"That is what set me wondering... I made a public post on Facebook and shared on Twitter. I thought I should try - you never know and at least I will have tried.

"I have been totally and utterly overwhelmed, shocked and speechless by the response. The kindness of strangers reaching out to me and helping in my search. It is so very humbling."

She added: "When I saw the First Minister had tweeted it this morning I was astounded. Words can not express how I felt - my wee search for a treasured book."

The pair met in 2003 when they were both working in the Scottish Parliament and married in October 2006.

In January 2007, Mr Payne suffered with end-stage kidney failure but received a transplant and "never looked back".

Together the couple welcomed Thomas in February 2009 and Rachel in July 2010.

But in February 2015, he became ill and was diagnosed with non-Hodgkins Lymphoma. Despite initially rallying, the family learned it was terminal in October 2015.

"Off Jude's mini bucket list, one thing was to make it back into Parliament to see his colleagues again," Mrs Payne said.

"This he did, in early November. It was a lovely occasion - a wake with the main person in attendance. This was a lovely opportunity where so many people were able to speak to Jude.

"He was my husband, my best friend, my inspiration, my soul mate, the father to my children, my future."

When Mr Payne was first ill, in 2007 he wrote letters for his wife to read later, before also penning letters for her and their children when he was terminally ill.

"You really recognise the power of the handwritten word once the person who wrote it has died," Mrs Payne said.

"It makes finding the book even more important."

Widowed And Young - WAY - is a peer support charity which helps people who have been widowed under the age of 50.