Arlene Foster: It was my decision not to send anyone from DUP to papal visit 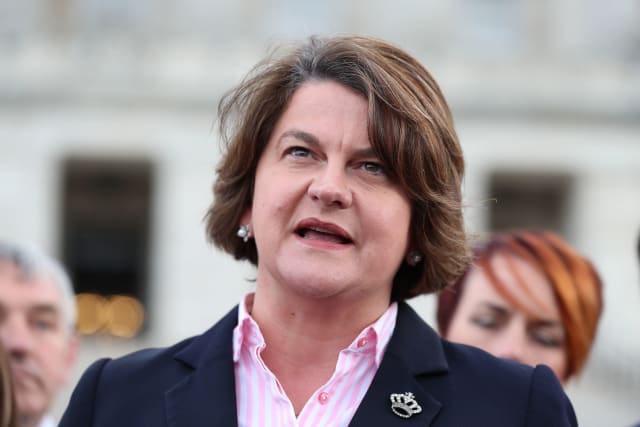 The leader of the Democratic Unionists has said it was her decision not to send a party representative to see the Pope in her absence.

Arlene Foster denied vetoing the attendance of a colleague, when she declined due to a family commitment, but said no-one else from the DUP went to hear the Pope speak at Dublin Castle because the invite was addressed to her "personally".

Other Northern Ireland party leaders did not attend Saturday's engagement - such as Ulster Unionist leader Robin Swann and Alliance leader Naomi Long - but they sent colleagues in their stead.

Pressed on the DUP no-show at her first public appearance since the papal visit, Mrs Foster said decisions of other leaders were a "matter for other parties".

The leaders of the main Protestant churches in Northern Ireland also attended the papal address in Dublin.

Critics have accused Mrs Foster and the DUP of missing an opportunity to make a significant gesture of reconciliation.

The DUP leader had announced ahead of the pontiff's visit that she would not be taking up the invite due to a long-planned family holiday.

"I received an invitation personally to attend, I think it was the function to be held by the Republic of Ireland's Government," Mrs Foster said in Belfast on Tuesday.

"I was out of the jurisdiction on a long pre-planned holiday with my family because I know how busy September and October are going to be.

"I think it is very ironic actually that while the Pope was marking a celebration of the family others can't understand that I was with my family at the weekend. That's the reality."

Challenged on the DUP's stance compared to the parties who sent representatives in place of their leaders, she said: "That's a matter for other parties.

"I think very clearly I acknowledged the significance of the event when I made the statement saying I wouldn't be going.

"I know it's a hugely significant event, particularly for Roman Catholics in Northern Ireland and in the Republic of Ireland, and that is something I hope that they enjoyed when the Pope was here."

When deputy leader Nigel Dodds was asked at the same press facility why he had not attended instead, Mrs Foster answered the question.

"I was the one who received the invitation and it was my decision that I was away out of the country at that time," she said.

Asked if she had essentially vetoed his attendance, she replied: "That's not the way the DUP operates."