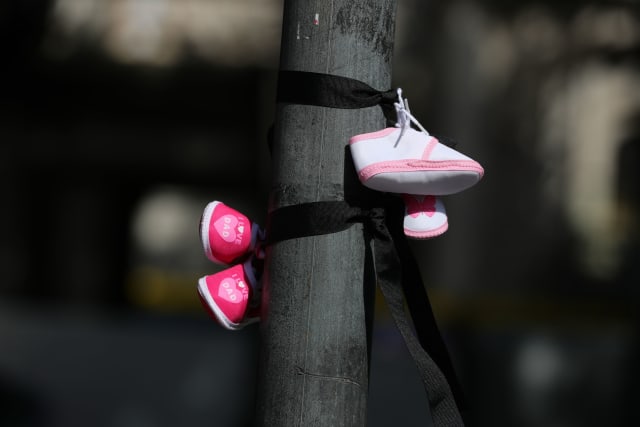 One of a number of protests against clerical child sexual abuse was held near Dublin Castle on Saturday morning.

The protest was organised by Margaret McGuckan, a survivor of historic child abuse who spent years in the Nazareth House children's home and helped campaign for the introduction of the Historical Institutional Abuse inquiry.

Ms McGuckan says the protest is a symbolic gesture to the Pope and the church that victims have not gone away.

She said: "The Pope now needs to stand up to the plate and do something for the survivors. We need redress, we need the church held to account.

"It's not just Ireland, look what has happened in America, people fall away from the church because they don't practice what they preach."

During her time in Nazareth House, Ms McGuckan says she was beaten, starved, neglected, emotionally, physically and mentally abused at the hands of nuns charged with her care.

Banners were unfurled at Dublin's Dame Street demanding redress for victims and an end to what they see as a Papal cover-up.

Many at the protest were from the global survivors network End Clergy Abuse who had baby shoes tied around their neck in protest for the children who died in the Mother and Baby Homes across Ireland.

Pete Saunders, a survivor who was abused in Jesuit school in London, travelled from England's capital to attend the protest.

"I came to Ireland to give support to survivors here.

"If this was any other organisation in the world, the head of that organisation would be held to account to tackle the issue within his company.

"The people involved should be brought to justice. Words are very nice but we would like to see action."