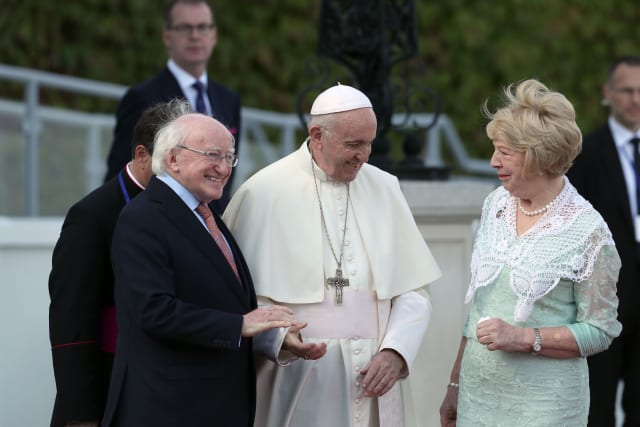 Irish President Michael D Higgins has told Pope Francis of the anger felt by those in Ireland who were abused as children by Catholic clerics.

The conversation came during a visit by the pontiff to the home of the Irish President, Aras an Uachtarain, in the Phoenix Park in Dublin.

Pope Francis met Mr Higgins on the first stop of his two-day visit to Ireland.

A number of protests by abuse victims are due to take place during the visit.

It has been reported that the pontiff will meet a number of victims while he is in Ireland.

Shortly after touching down at Dublin Airport for the first visit of a pope to Ireland in almost 40 years, Pope Francis arrived at Aras an Uachtarain in a grey Skoda car.

He was greeted by Mr Higgins and his wife Sabina.

An Irish Army band played the national anthems of Vatican City and Ireland during the arrival ceremony.

Moving inside the property, the pontiff signed the visitors book before entering into a private meeting with Mr Higgins.

A spokesman for Mr Higgins said that during the meeting, the Irish President raised with the pope the "immense suffering and hurt caused by child sex abuse perpetrated by some within the Catholic Church".

In a statement issued after the meeting, the spokesman said Mr Higgins also told Pope Francis of the "anger which had been conveyed to him at what was perceived to be the impunity enjoyed by those who had the responsibility of bringing such abuses for action by the appropriate authorities and have not done so".

"The President welcomed the honest and forthright language that His Holiness used when addressing the issue in his recent Letter to the People of God," the spokesman for the President said.

"He conveyed to Pope Francis the widely-held view that all would benefit from a set of actions that gave the necessary assurances to all citizens past, present and future, of all faiths and none."

The two men also agreed on the importance of protecting vulnerable communities and individuals, and discussed issues including homelessness, health, education and nutrition.

This was the third time that Pope Francis and Mr Higgins have met. Last May they met at the Vatican.

The Pope completed his visit to Aras an Uachtarain by planting a tree in the grounds of the historic property.

Francis planted an Irish oak tree (quercus robur) on the lawn in front of the south portico. In doing so, he became the second Pope to plant a tree on the grounds of the residence.

Pope John Paul II planted an Irish oak on the same lawn during the last papal visit in 1979.

A Syrian family, who are asylum seekers, were invited to observe the ceremony. They watched the proceedings alongside Aras an Uachtarain staff.

Other dignitaries who have planted trees on the lawn at Aras an Uachtarain include Presidents John F Kennedy and Eamon de Valera, the Queen and President Barack Obama.

Both the Queen and President Obama planted English oak trees during their visits to Ireland in 2011.

Ireland's first president Douglas Hyde planted a Cornish elm on the north lawn of Aras in 1939.

Since then, each of the country's nine presidents has planted an official tree on the grounds of the residence.

Aras an Uachtarain dates back to 1751.

The property, which is situated on 1,752 acres of land in Phoenix Park, previously served as the residence for the Viceroys who oversaw British rule in Ireland.

It became the official residence of the President of Ireland in 1938.