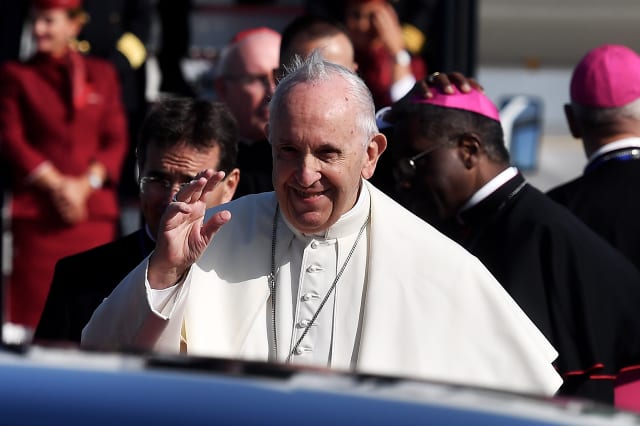 The Pope has spoken of his pain and shame at the failure of church authorities to tackle the grave scandal of clerical abuse in Ireland.

On the first day of his historic Irish visit, the pontiff said people had a right to be outraged at the response of senior figures in the Catholic Church to the "repellent crimes" inflicted on young people.

In a speech at Dublin Castle, he also expressed hope that remaining obstacles to reconciliation in Northern Ireland could be overcome.

With the reverberations of a litany of church sex abuse scandals casting a shadow over the first papal visit to Ireland in almost 40 years, Francis confronted the issue in his address inside the castle's St Patrick's Hall.

"With regard to the most vulnerable, I cannot fail to acknowledge the grave scandal caused in Ireland by the abuse of young people by members of the church charged with responsibility for their protection and education," he said.

"The failure of ecclesiastical authorities - bishops, religious superiors, priests and others - adequately to address these repellent crimes has rightly given rise to outrage and remains a source of pain and shame for the Catholic community.

The pontiff's predecessor, Pope Benedict, has also addressed the issue.

"His frank and decisive intervention continues to serve as an incentive for the efforts of the church's leadership both to remedy past mistakes and to adopt stringent norms meant to ensure that they do not happen again," Francis added.

He said the Church in Ireland had played a role in child welfare which could not be obscured.

"It is my hope that the gravity of the abuse scandals, which have cast light on the failings of many, will serve to emphasise the importance of the protection of minors and vulnerable adults on the part of society as a whole," he said.

"In this regard, all of us are aware of how urgent it is to provide our young people with wise guidance and sound values on their journey to maturity."

The Pope said he also wished to acknowledge women who in the past had "endured particularly difficult circumstances".

On Northern Ireland, he praised those who helped forged the historic Good Friday Agreement in 1998.

In an apparent reference to the political deadlock in Northern Ireland, which has seen the region without a properly functioning devolved government for 20 months, Francis said: "We can give thanks for the two decades of peace that followed this historic agreement, while expressing firm hope that the peace process will overcome every remaining obstacle and help give birth to a future of harmony, reconciliation and mutual trust."

The speech came after a private meeting with Taoiseach Leo Varadkar, and later the Irish premier urged the Pope to "listen to the victims" in his own address at Dublin Castle.

Hundreds of thousands of people are expected to welcome Francis during his whistle-stop tour of the capital city and Co Mayo over the weekend.

In the coming 36 hours, the Pope will witness a country that has undergone seismic social changes in the four decades since the last papal visit in 1979, when John Paul II was lauded by a nation shaped by its relationship with an all-powerful Catholic Church.

Senior Irish clerics and other dignitaries gathered on the apron of the runway at Dublin Airport to greet the Pope and clapped as the Alitalia flight landed just before 10.30am.

Irish and Vatican flags were flown from the cockpit windows as the aircraft taxied toward its stand.

Francis emerged from the plane soon afterwards, walking down the steps to be greeted on a red carpet by Ireland's deputy premier and Foreign Affairs Minister Simon Coveney, his wife, Ruth, and their three daughters, Jessica, Beth and Annalise.

While the Pope is sure to receive a warm reception from the thousands of pilgrims who have travelled to be part of the occasion, he will also be met by protesters angry at how the church dealt with the sex abuse scandals that have damaged trust in the religious institution and seriously weakened its influence on Irish society.

Mr Coveney acknowledged that many people had mixed feelings about the visit.

"I think it's been difficult for many people, for victims, for Catholics and many of the clergy," he said.

"But I hope and expect that this weekend will be a very powerful moment. He has a personality that can reach out to Irish people."

At some point over the weekend, the Pope will meet a number of abuse victims in a private meeting.

Earlier this week, he wrote a 2,000-word letter to Catholics in which he condemned the crime of sexual abuse by priests and subsequent cover-ups.

He demanded accountability in response to fresh revelations in Pennsylvania in the United States of decades of misconduct by clerics.

Francis is ostensibly in Ireland to attend the World Meeting of Families (WMOF) - a major global church event focused on promoting family values.

However, he will also fulfil a number of other engagements.

With Ireland in the midst of a high-profile homelessness problem, the Pope will meet a number of affected individuals and families at a centre run by a religious order.

Tens of thousands of people are expected to line the streets of Dublin city centre on Saturday afternoon as he passes through in his famous Popemobile.

In the evening, he will join 82,000 pilgrims at a musical festival in the landmark Croke Park Gaelic Athletic Association stadium.

On Sunday, the Pope will fly west to Co Mayo, where he will follow in the footsteps of John Paul II and take part in a religious service at a holy shrine in Knock.

He will then return to Dublin for the closing centrepiece of the WMOF event - an outdoor Mass in front of an expected congregation of half a million people in Phoenix Park.