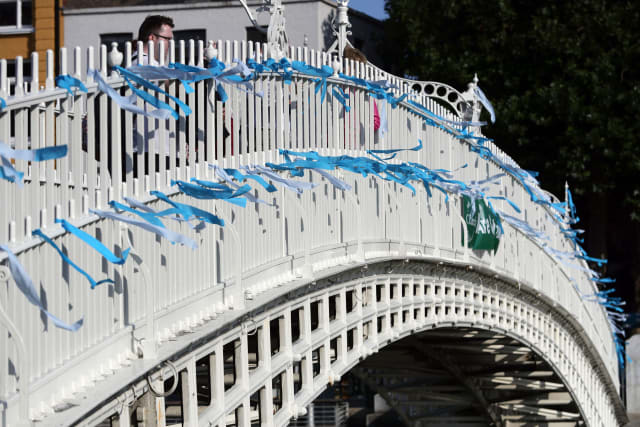 The Vatican's files should be opened to prove it is serious about tackling child abuse, a veteran campaigner has said.

Blue ribbons were tied on the Ha'penny Bridge over the River Liffey in Dublin city centre in a symbol of solidarity with victims and survivors of clerical wrongdoing, which has rocked the Catholic Church in Ireland.

The distinctive pedestrian span was also awash with rainbow flags and purple umbrellas supporting the ordination of female priests.

"It is very painful and it will be very disturbing but the truth is buried in the bottom, in the secret archives, of a lot of dioceses and especially in the Vatican."

The demonstration was styled as a welcome to the pontiff rather than a protest.

Those taking part held placards with the message: "Justice for abused women" and decried "vile" language used about members of the LGBT community by some in the Catholic Church.

Tourists in this popular and busy part of the city centre gathered to watch.

The gathering happened just a couple of minutes walk from Dublin Castle where the Pope meets Irish Taoiseach Leo Varadkar on Saturday afternoon.

Among those present were Maria Angalika Fromm, 67, from near Frankfurt in Germany, who said she had worked for 50 years for a changed church and urged Pope Francis to persist with his reforms.

She added: "He needs to break down the patriarchal structures and be open to women's ordination without celibacy and caring for all people including gay and lesbian.

"He has to go on and not be stopped by the old conservative men in the Vatican."

Eddie McGuinness, 49, an organiser of the annual Gay Pride festival in Dublin, said he wanted the church to welcome LGBTQ people.

"The Pope asked for forgiveness but let's show forgiveness and embrace the diversity of all families."

He added: "It is about love, so why not embrace the teachings of Christ?

"Men cannot do this on their own, they need women behind them and they need the LGBTQ community behind them as well and that is what we need to embrace."