Edinburgh TV Festival highlights: What you might have missed 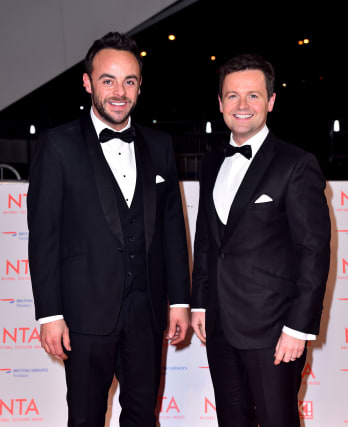 The Edinburgh TV Festival has wrapped up for another year.

The three-day industry event made headlines, with channel bosses and TV stars talking about the future of the industry, their own experiences, and who or what may not appear on our screens again.

Here are the highlights from the festival:

Dec will not host I'm A Celebrity alone this year

ITV's director of television Kevin Lygo revealed that Declan Donnelly will be joined by a new co-host for this year's series of I'm A Celebrity... Get Me Out Of Here! while his partner Ant McPartlin remains off the small screen.

McPartlin will be taking the rest of the year off after stepping back from TV commitments and public appearances following a drink-driving conviction which saw him banned from the road for 20 months and fined £86,000.

Lygo said somebody has been chosen to join Donnelly, but remained tight-lipped over who it would be.

The future of Big Brother on Channel 5 is uncertain

Channel 5's director of programmes Ben Frow confirmed he is planning a "year without" Big Brother.

The reality show has seen ratings slide in recent years as programmes such as ITV2's Love Island have surged in popularity.

Frow added: "I never say never because the world is constantly changing, and I think it would be irresponsible to not keep all options open, but at the moment I'm planning for a year without Big Brother."

The Chewing Gum creator and lead star delivered a powerful speech for the James MacTaggart Memorial Lecture, during which she claimed she was sexually assaulted by strangers while working, although she did not say when or where it happened.

The 30-year-old was the youngest and only the fifth woman to deliver the MacTaggart speech.

She was also the first from a black, Asian or minority ethnic background.

The Labour leader delivered the Alternative MacTaggart lecture, where he suggested the creation of a "sister organisation to the BBC" to rival Netflix and Amazon.

A British Digital Corporation could "deliver information and entertainment to rival Netflix and Amazon but also to harness data for the public good", he said in a speech at the Edinburgh TV Festival.

Hugh Grant declares "politics is show business for the ugly"

During a panel about his BBC series A Very English Scandal, the actor said he realised how relevant its story is in 2018.

He played Liberal Party MP Jeremy Thorpe, who was involved in a high-profile trial in the 1970s for conspiring to murder his former lover Norman Scott.

Grant told the audience: "It's simply that, a big part of Thorpe and of what he did was narcissism.

"And in the last six years of my life, doing the whole Hacked Off thing and coming into contact with a lot of politicians all the time, it became very clear to me that whoever said it got it right: that politics is show business for the ugly."

The EastEnder's actor's tirade against Brexit and former prime minister David Cameron won the television moment of the year at the Edinburgh TV Awards during the festival.

Dyer laid into Mr Cameron for calling the EU referendum when he appeared as a guest on Good Evening Britain, ITV's one-off night-time show hosted by Piers Morgan and Susanna Reid.

Dyer called Cameron a twat and said: "Let's be fair. How come he can scuttle off? He called all this on."

Paul Mortimer, controller of digital channels at ITV, backed the decision to cast only slim, attractive people on the hit ITV2 dating show, saying it is "aspirational".

Asked about the show, which faced backlash over a lack of diversity among its cast, Mortimer said: "I think on the body image thing, we cast very attractive people, it's a sexy show.

"It is entertainment on ITV2 and in the same way Hollywood casts a certain type to get bums on seats in theatres or other shows, the Strictly dancers or whatever...

"Also for us it's a very aspirational programme for our audience. (It's the) perfect holiday they can only aspire towards."

BBC says losing Bake Off was actually a good thing

BBC executive Charlotte Moore has said losing The Great British Bake Off to Channel 4 created opportunities for other shows and producers as she quipped: "Because we've got money again."

Ms Moore, who has been the corporation's director of content since July 2016, said: "I've made no secret of the fact that when you have commissioned a show and it becomes the biggest show... it's very sad when it's not on your channel any more.

"But with every show that moves on... it gives you creative headroom, so it's a great thing for other producers because we've got money again and we've got room in the schedule for big hits."

The former Strictly Come Dancing judge said she only gets asked to appear on TV to discuss the latest line-up, and that she is not thrilled about it.

The choreographer and presenter said during a panel she is a "sort of semi-celebrity", and that "every time there is a new group of celebrities going on Strictly, I'm again invited back on to television, not so eagerly, I might add, to talk about what I think about them, what I think about the curse of Strictly."

Lumley confessed that she has kept a number of items from her time filming travel documentary series Girl Friday nearly 25 years ago, one of which she wants to be "buried with".

The actress lived on a desert island near Madagascar alone with few supplies for 10 days for the series, which aired in 1994, and she said it was the job that made the biggest impact on her life.

During an appearance at the Edinburgh TV Festival, Lumley unveiled a bag of items that she has kept, including a one pound bag of rice, a small knife, a ladle, a shell and a pair of shoes that she made from her bra to protect her feet.

But it was the lingerie-inspired footwear that she will take to the grave with her, she told an audience at the festival.