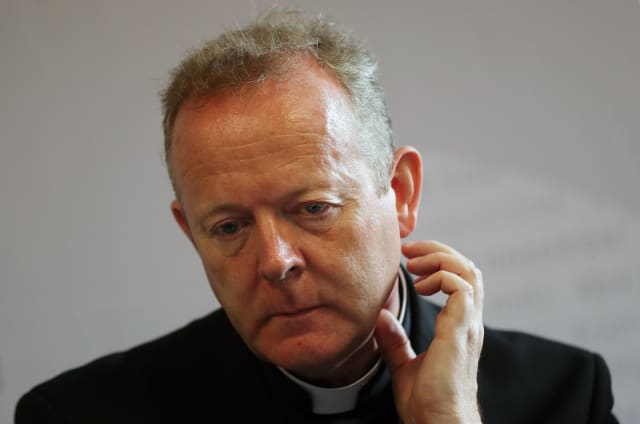 The leader of the Catholic Church in Ireland says meeting sexual abuse survivors is difficult for all involved, as victims do not trust the church.

Speaking at the World Meeting of Families media briefing on Thursday, Bishop Eamon Martin, the Archbishop of Armagh and the Primate of All Ireland, said he never doubted Pope Francis would meet with survivors of clerical abuse during his visit to Ireland this weekend.

He said: "Hearing Pope Francis speak on this issue, he has always been very clear that he wants to reach out to survivors.

"It is a difficult thing to do, as I have found in my own experience, while meeting with survivors is not easy for any of us, but survivors sometimes simply don't trust us.

"I think it's important that the meeting is seen as a sacred or special moment for the survivors and Pope Francis.

"I expect Pope Francis will be in listening mode as we all should be in dealing with this issue."

Alongside Bishop Martin was Bishop of Chicago Blase Cupich, who referenced the recent Hollywood #MeToo movement in regards to the church's own scandals which he labelled an infected boil.

"People are finding freedom to come forward when they see accusations against certain individuals.

"This might seem threatening to people within the church as it could prompt others to demand justice in their circumstances, but I feel this is the only way we can lance this boil that is so infected.

"This is a dark moment for the church, a black moment, it's causing us shame.

"The real darkness is within the victims, that is where Jesus is, and we must always put the victims first."

Pushed on the topic of LGBTQ+ people within the church, the bishops were asked their view of a recent speech by Father James Martin, who said those who promoted conversion therapy were wrong.

Bishop Martin said he was not aware of Catholic conversion therapy for LGBT people in Ireland.

"Conversion, change and repentance is something that is offered to all Christians but I don't fully understand the idea of conversion therapy.

"I think a call to chastity, which is there for all Catholics with regard to sexual activity outside of marriage is something that is very real, but I wouldn't support this idea of some kind of psychotherapy within a church setting."

Bishop Cupich was in agreement with the Primate who said that adults who choose to "other" young people because of their sexuality are not living by the gospel.

"We want to make sure when we're talking about people's intimate sexual lives, and there are aspects in all of our lives that need redemption, that we need to make sure that we're going to make sure to use the gift of our human sexuality which goes beyond genital experiences.

"We're all sexual beings, we want to make sure a so-called a conversion model doesn't start from the premise that the individual is in some way deformed or sick, like someone else who needs therapy.

"That's a message that so often that in dealing with young people who are struggling with sexuality questions are so sensitive to.

"If that's the first message that we as adults are giving to young people we're setting them on the wrong path.

"Let's make sure we're very clear and sensitive to the fact everyone struggles with how they live out their sexuality and we are always in need of redemption, and that calls for chaste lifestyle, but to stigmatise one over the other is very damaging and is not the gospel."