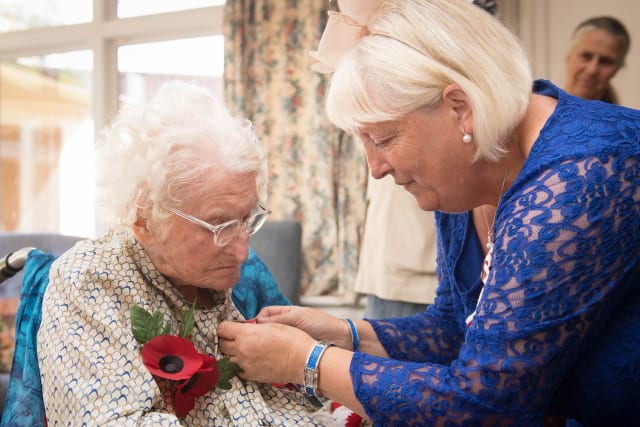 Britain's longest-serving poppy seller has died at the age of 103, nine days after being presented with her MBE.

She spent the next 97 years collecting for the charity, but announced earlier this year that she would be hanging up her tin for the final time.

The great-grandmother, from London, was included in this year's Queen's Birthday Honours List for her remarkable service to the Legion.

On August 6, she sat in a wheelchair draped in a poppy-patterned blanket and was handed the MBE on behalf of the Queen by the Vice Lord-Lieutenant of Greater London, Colonel Jane Davis. She died on August 15.

Her support for the Legion will continue after her death, with a donation from each copy of her memoir going to the charity.

In an obituary, her family said: "She had known the cost of war.

"Four of her uncles died in the First World War; another was a lifelong invalid from Afghanistan in 1914; her fiance was killed in a plane crash and her brother, who won the MC for bravery in Egypt, died of cerebral malaria or possibly suicide; two godfathers died and her father was badly wounded at the Somme.

"From her prodigious memory she could recall the London bombing raid on November 28 1916, and her first meeting with her father when she was four, when he finally returned from active service."

Mrs Powell lived close to where poppies were made in Richmond for the first Poppy Appeal, and sold them on Richmond Bridge with her mother, Evelyn.

Earlier this year, she recounted how the poppies were so popular that they "ran out in no time", and her mother made more to sell out of red crepe paper.

As a young girl, Mrs Powell went to boarding school at Downe House in Newbury, and had a "make-do-and-mend" attitude that remained throughout her life.

"It was not surprising when the family found a poignant note, her last message meant to be read after her death, written on the back of a used envelope," her obituary said.

Her father, Charles Ashton James, served with the 126th Baluchistan Infantry and was left wounded after being shot in the head during the Battle of the Somme.

Mrs Powell's first fiance, Robin Ellis, a commander in the Royal Navy, died in 1944 when the Lancaster bomber he was flying in crashed near Inverness.

Her younger brother Peter, a major in the Army, died during the Second World War.

During that conflict, Mrs Powell trained as a voluntary aid detachment (VAD) nurse providing civilian nursing to the military.

"In 1944 Rosemary worked in Botleys Park, Chertsey," her family said.

"Soldiers wounded on the beaches in Normandy and diagnosed with gas gangrene were patients.

"Rosemary was allotted to Madame Ethel Florey as her special nurse, and was probably the second person to save someone's life with an injection of the new, dark yellow, syrup-like penicillin.

"Because the injections were slow, Madame used to give a cocaine injection first.

"Rosemary suggested including cocaine with the penicillin, and the one injection was a success. All survived.

"In the First World War they would all have died."

She lived in Africa for a year in the 1950s but made poppies out of paper to give to local people during Remembrance.

Her family said the couple's time in France was mostly spent gardening "which may well have been the key to her healthy longevity".

Mrs Powell's passion for gardening was highlighted by her annual trips to Chelsea Flower Show, from 1933 to May this year - when she met Mary Berry.

When she returned to the UK, Mrs Powell sold poppies in London including at the Kings Mall shopping centre in Hammersmith.

Her last collection was at her nursing home in the city, where she was presented with her MBE.

As she inspected the medal during a short ceremony attended by her family, Mrs Powell said: "Isn't it wonderful?"

Her funeral will be held later this month, with a special memorial event at St Paul's Church, Knightsbridge - where she was married in 1952 - to follow in October.