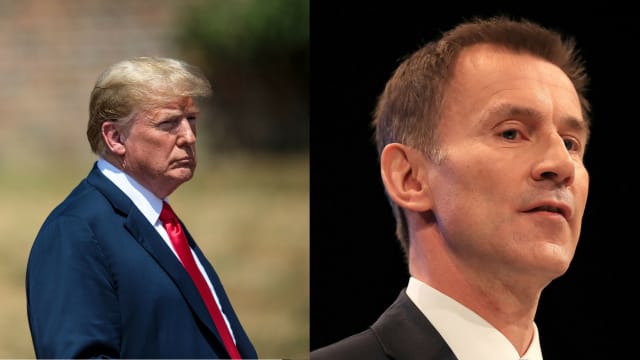 The Foreign Secretary is due to meet secretary of state Mike Pompeo in Washington the day after Donald Trump's former personal lawyer and "fixer" Michael Cohen admitted making payments to two women "at the direction" of the president.

He is also due to meet chief of staff John Kelly and adviser Jared Kushner amid the fallout from Cohen's guilty plea to charges including campaign finance fraud stemming from money given to adult actress Stormy Daniels and ex-Playboy model Karen McDougal.

Deputy US attorney Robert Khuzami told reporters after Cohen's guilty plea in a New York court that he submitted invoices to the candidate's company to obtain reimbursement for the unlawful campaign contributions.

Mr Hunt finds himself inadvertently in the middle of a US political storm on the second day of a three-day trip to the United States, his first since replacing Boris Johnson as Foreign Secretary.

The crimes pre-dated the veteran political player's time as head of Mr Trump's 2016 White House bid, although they were prosecuted as part of an investigation into Russian interference in the election.

Led by special counsel Robert Mueller, the probe is investigating allegations that associates of Mr Trump colluded with Russian figures to influence the vote.

On Tuesday Mr Trump renewed his attack on the investigation, calling it a "witch hunt" and Manafort's conviction a "disgrace".

Mr Mueller's probe has sought the extradition of 13 Russians indicted over interference in the 2016 election, while Washington has imposed sanctions on the Kremlin.

The US has also expelled dozens of Russian diplomats following the March poisoning of Sergei and Yulia Skripal in Salisbury that in July claimed the life of Dawn Sturgess.

During a speech in Washington on Tuesday, Mr Hunt called on the EU to maintain pressure on Russia and ensure "that we truly stand shoulder to shoulder with the US".

"That means calling out and responding to transgressions with one voice wherever and whenever they occur, from the streets of Salisbury to the heart of Crimea," he said.

The Foreign Secretary will travel to New York on Thursday to address the United Nations Security Council on the work of the UK and the US to fight against Islamic State.

Mr Hunt will also meet the UN Secretary General Antonio Guterres to discuss reform of the UN and humanitarian issues.