First Beano annual from 1939 to be sold at auction

A rare copy of the first Beano annual, published before the appearance of favourite comic character Dennis the Menace, is to be auctioned.

The 1940 Beano Book was published around the outbreak of the Second World War in 1939, a year after the weekly comic was first published by Dundee-based DC Thomson in July 1938. 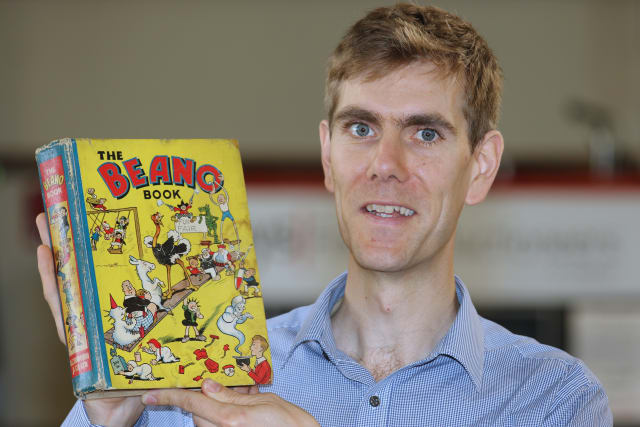 It is the first of 79 Beano annuals published to date and features comic strips, stories and illustrations - but does not include mischief-maker Dennis the Menace, who made his first appearance in 1951.

His pet dog Gnasher was introduced in 1968.

The annual is to go under the hammer at Keys Fine Art Auctioneers in Aylsham, Norfolk and is expected to sell for between £1,200 and £1,500.

Robert Henshilwood, head of books for Keys, said: "Beano is the archetypal kids' comic, and it has been published without a break for 80 years.

"It is very rare to see a copy of the first ever Beano Annual, especially in such good condition, and we are expecting a lot of interest from collectors from right across the UK and beyond."

He said the annual had a small print run.

It is one of a number of comics and children's books to be auctioned at the two-day book sale at Keys, which takes place on Thursday August 30 and Friday August 31.

The Beano annual will be auctioned on the first day of the sale, which also includes a series of Rupert the Bear annuals dating from the 1930s onwards.

According to DC Thomson, the word Beano is a shortened version of bean feast, meaning a rowdy jollification.

The comic was reduced to 12 pages per fortnight during the Second World War due to paper shortages, and after the conflict the Beano editor's name was discovered on a Nazi assassination list for "gross disrespect".