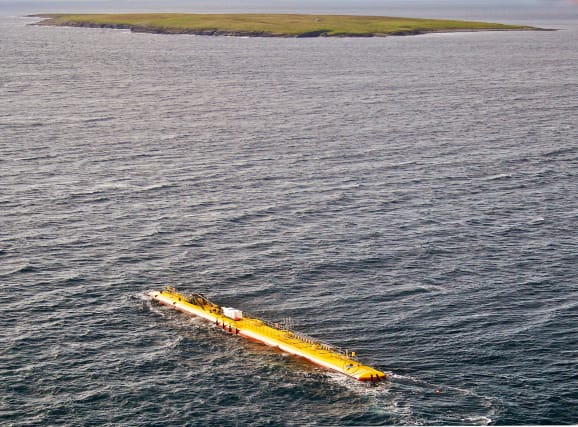 A tidal steam turbine off the coast of Orkney has produced more renewable energy in a year than Scotland's whole wave and tidal sector produced before it.

In 12 months of continuous operation, the SR2000 supplied the equivalent annual power demand of about 830 households.

The turbine - the most powerful of its kind in the world - has been described as setting a benchmark for its industry due to its performance.

It produced 3GWh of renewable electricity during its first year of testing at the European Marine Energy Centre.

Over the 12 years before its launch in 2016, wave and tidal energies across Scotland had collectively produced 2.983 GWh, according to Ofgem.

"Its first year of testing has delivered a performance level approaching that of widely deployed mature renewable technologies."

He added: "The ability to easily access the SR2000 for routine maintenance has been a significant factor in our ability to generate electricity at such levels over the past 12 months, including over winter."

The team at Scotrenewables believes that their success - combined with Meygen's generation of over 8GWh over the past year from four tidal turbines deployed in the Pentland Firth - is convincing evidence of tidal power's market readiness.

"Scotland's remarkable marine energy resource has placed us front and centre in developing this industry with global potential.

"To keep driving progress it's critical that both Scottish and UK governments recognise the potential of these technologies and work with industry to fully commercialise these innovations."