Rooms with beer on tap: BrewDog opens hotel in US 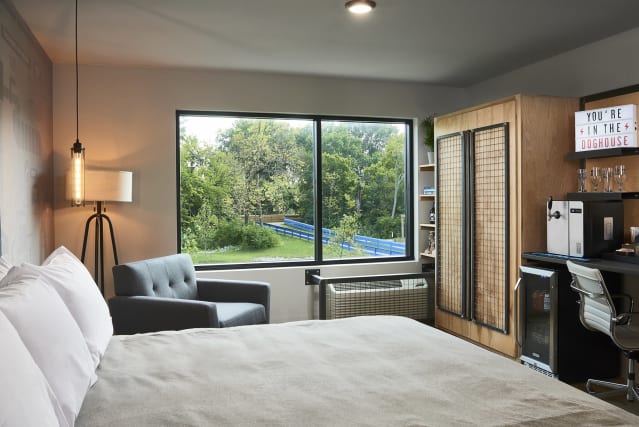 BrewDog has opened its first "craft beer hotel" in the US.

Named the DogHouse, it is located on the site of its brewery in Columbus, Ohio, and has beer taps in each room.

A crowdfunding drive raised more than 300,000 US dollars (£233,000) for the project and those who contributed were given first access to booking rooms at the hotel before it opened to the public.

The hotel has 32 rooms and BrewDog said guests will be able to watch beer being made from rooms overlooking the brewery.

A second DogHouse hotel is under construction at BrewDog's headquarters in Ellon, Aberdeenshire, due to open next year.

Co-founder James Watt said: "For many beer fans, the idea of a beer hotel was just a pipe-dream. A beer utopia that was never thought possible. Until now. Thanks to the backing of our global community of beer evangelists, we've been hard at work to make that dream a reality."

BrewDog US chief executive Tanisha Robinson said: "The DogHouse is truly a hotel like no other.

"With the help of our passionate community, we have created a must-visit destination for craft beer fans around the world.

"We never shy away from ambitious tasks at BrewDog and the creation of the DogHouse is no exception. We have pushed the boundaries of what modern hospitality can be and, in doing so, have created an unrivalled beery experience.

"We hope this inspires brewers and hoteliers to continue innovating and expanding the possibilities of what can be done with beer."