A "no deal" Brexit could lead to hospitals running out of drugs and the spread of disease, NHS managers have warned.

Poor co-ordination by ministers and health service bosses means there has been a failure to prepare for the UK to be left without a Brexit deal, a leaked letter from NHS Providers said.

He said a hard Brexit or no deal could negatively effect "the entire supply chain of pharmaceuticals" and "jeopardise" the EU citizens making up the "workforce on which the NHS relies".

Mr Hopson's letter was sent to NHS England chief executive Simon Stevens and NHS Improvement chief Ian Dalton on Friday, and has been leaked to the Times. 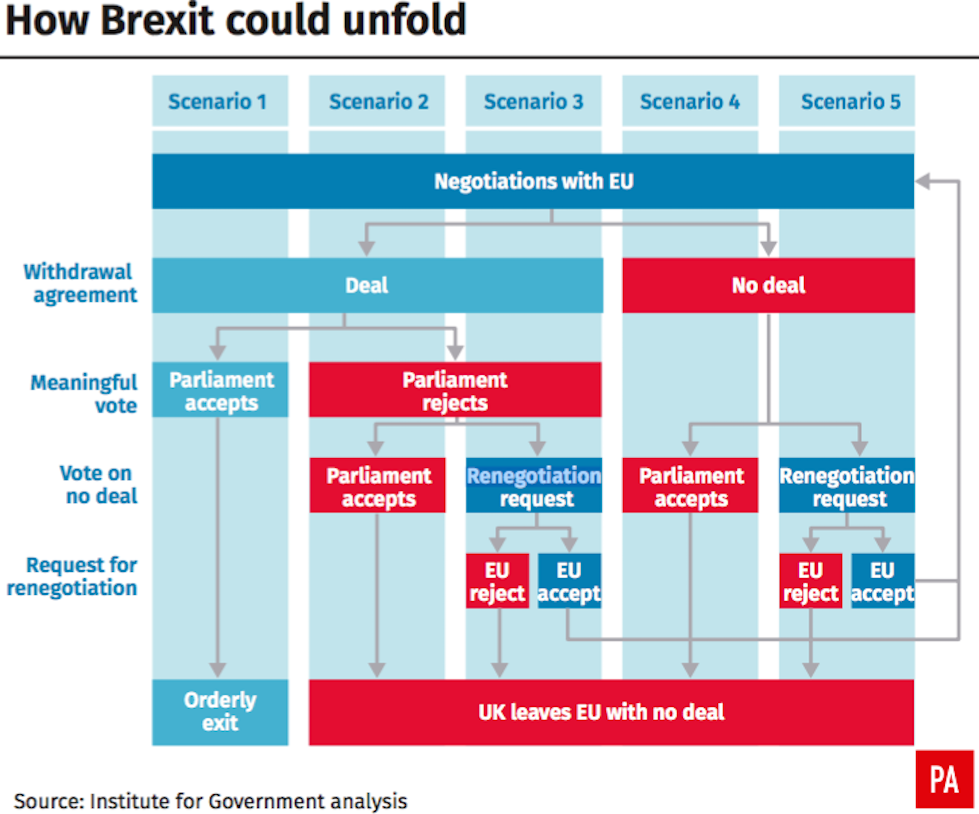 Mr Hopson said the possibility of a no-deal or hard Brexit "with minimal regulatory alignment appears to be growing".

"For as long as that risk remains, it is important that detailed operation planning is undertaken across the NHS," he wrote.

"Yet trusts tell us that their work in this area is being hampered by the lack of visible and appropriate communication.

"Our members have begun planning... but they have hit a problem, in that some activities are clearly best done at a national level and, in the view of trusts, are best co-ordinated by NHS England and NHS Improvement.

"However there has been no formal communication to trusts from either of your organisations on this issue."

Mr Hopson warned it would be more "efficient and effective" for ministers and the NHS bodies to work out a national contingency plan for trusts, rather than "expecting trusts to develop contingency plans individually, in a vacuum, and have to reinvent the wheel 229 times".

Poor national co-ordination, he added, could mean "both stockpiles and shortages of medicines and medical devices".

A spokesman for NHS Providers confirmed the letter was genuine but stressed it had not been leaked by his organisation.

"We have not leaked this letter," he said. "These conversations about Brexit are obviously something that happened between ourselves and the other organisations.

"This correspondence was private but it has been leaked and we are not saying anything further about it."

"There is immediate planning which the health department, with other parts of Government, are undertaking around securing medicine supply and equipment under different scenarios," he said.

"That will obviously crystallise when it's clear later this autumn what the UK's position will be."

Brexit Secretary Dominic Raab will head to Brussels on Tuesday and Wednesday for the latest round of negotiations with EU chief negotiator Michel Barnier, which a Downing Street spokesman said would be "resolving the few remaining withdrawal issues".

On Thursday, the government will publish the first of a series of technical notices, designed to help people and businesses prepare for a no-deal scenario.

An NHS spokeswoman said: "Ensuring the NHS is prepared for every potential outcome of Brexit is a priority.

"Government leads on contingency planning for different scenarios and we are working with them on this and ensuring NHS voices are heard.

"We will be working with our colleagues and partners across the NHS to ensure plans are well progressed, and we will provide the NHS with the support it needs."