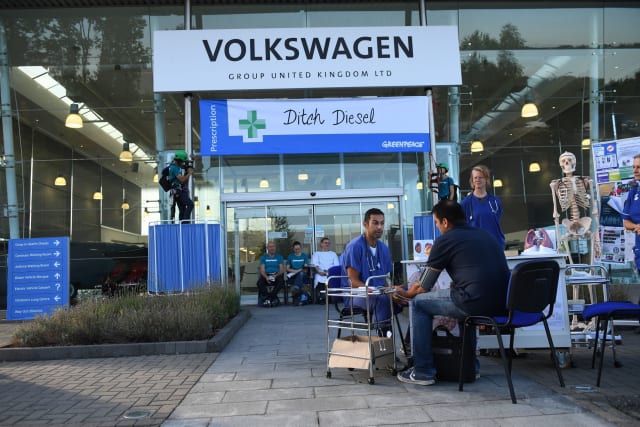 Volkswagen's UK headquarters was blockaded by Greenpeace campaigners and medics in protest against diesel vehicles.

The environmental organisation launched the stunt at the car manufacturer's office in Milton Keynes at around 7am on Monday.

Activists barricaded entrances to the building and set up a mock clinic offering health advice.

Greenpeace claimed more than 800 Volkswagen staff employed at the site - in roles such as marketing and distribution - were prevented from entering.

The peaceful protest ended at 3.30pm after Greenpeace said Volkswagen agreed to meet the campaign group.

A Thames Valley Police spokesman said officers went to the scene and 24 people were reported for summons on suspicion of aggravated trespass. They will be told to appear at Milton Keynes Magistrates' Court at a later date.

Concerns over emissions of nitrogen oxides have grown since Volkswagen was found in September 2015 to have cheated air pollution tests for 11 million diesel vehicles worldwide, including 1.2 million in the UK.

Greenpeace is demanding that the firm commits to stopping producing diesel cars and switching to only producing electric models.

An estimated 40,000 premature deaths a year in the UK are caused by air pollution, which is linked to health problems such as childhood illnesses, heart disease and dementia.

Greenpeace clean air campaigner Mel Evans said: "Volkswagen has previously refused to meet with us, so we came here today to make them listen.

"Because of the actions of our protesters and the thousands of supporters who joined in today by emailing Volkswagen, the company has now changed its policy worldwide and agreed to a meeting.

"Diesel pollution is choking our towns and cities, and filling up our emergency departments.

"We won't stop campaigning until Volkswagen does the right thing. It must face up to its responsibility for deadly air pollution and commit to end diesel production now."

A Volkswagen UK spokesman said: "Volkswagen is aware of a protest at its Blakelands premises this morning. The safety of our employees is our principal concern and so the matter is now being handled by the police.

"Roadmap E brings a 20 billion euro (£18 billion) investment to electric vehicle technology with the goal of 25% of Volkswagen Group vehicle production comprising electrified vehicles by 2025 and 50% by 2030."

It is almost 12 months since Greenpeace activists prevented a cargo ship carrying cars - including Volkswagen diesel models - from reaching Sheerness port in Kent by using boats to climb on board and hang from its 89ft high unloading door, in September 2017.