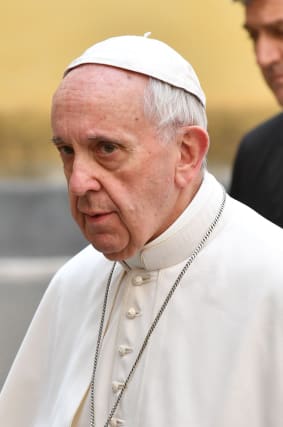 The Pope's latest intervention on child abuse days before his visit to Ireland is too little too late, a campaigner said.

Pope Francis said the church had delayed action and urged a culture of care at present and in the future as he published a strongly-worded letter on the subject.

He arrives in Ireland this weekend, a country where the Catholic church has been rocked by a series of sex abuse scandals involving members of religious orders.

Margaret McGuckin, leader of SAVIA (Survivors & Victims of Institutional Abuse), a charity set up to give a voice to victims of historic abuse in Northern Ireland, said: "It is a last-ditch attempt to see what he can do.

"It is too little too late, nothing will change."

A Pennsylvania grand jury report published recently in the US found more than 300 priests abused more than 1,000 children.

The Pope expressed "shame and repentance".

He added: "We acknowledge as an ecclesial community that we were not where we should have been, that we did not act in a timely manner, realising the magnitude and the gravity of the damage done to so many lives.

"We showed no care for the little ones; we abandoned them."

The Pope is due to spend two days visiting Dublin and the Knock shrine in the West of Ireland this weekend.

He will meet Ireland's President Michael D Higgins and Taoiseach Leo Varadkar, address a session of the World Meeting of Families and celebrate mass for half a million people at Phoenix Park.

Referring to the US abuse report, the pontiff noted that at least 1,000 survivors were victims of abuse at the hands of priests.

"The heart-wrenching pain of these victims, which cries out to heaven, was long ignored, kept quiet or silenced.

"But their outcry was more powerful than all the measures meant to silence it, or sought even to resolve it by decisions that increased its gravity by falling into complicity."

When the Pope came to office in 2013, she thought he was a breath of fresh air.

She was left disillusioned after his decision to ordain a bishop in Chile who is accused of covering up sexual abuse committed by a priest.

The Pope said: "Looking back to the past, no effort to beg pardon and to seek to repair the harm done will ever be sufficient.

"Looking ahead to the future, no effort must be spared to create a culture able to prevent such situations from happening, but also to prevent the possibility of their being covered up and perpetuated.

"The pain of the victims and their families is also our pain, and so it is urgent that we once more reaffirm our commitment to ensure the protection of minors and of vulnerable adults."