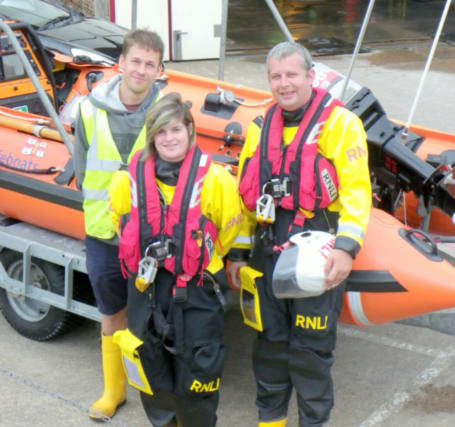 A woman has taken charge of a lifeboat for the first time in her station's 117-year history.

Karla Thresher, 28, has passed her exams to skipper the Minehead D class lifeboat.

The health care worker has already led her first emergency call to rescue two boys cut off by the tide off the north Somerset coast.

Ms Thresher had been preparing for her final assessment when the lifeboat station received the call to rescue the boys three miles away at Blue Anchor.

She found herself in charge of the D class boat and speeding to the scene with her RNLI assessor and fellow crew member Phil Sanderson aboard.

The two boys managed to scramble back to the beach safely and two hours later Ms Thresher was passed out to become a D class helm.

Her promotion comes 12 years after she first signed up as a member of the shore crew and follows 18 months of intensive training, including a week spent at the RNLI College in Poole.

It also reinforces a long-standing family link with the Minehead station as her great-uncle, Harold Bushen, was coxswain 50 years ago.

Her success means she will now be called on day or night to lead rescue missions anywhere between Hinkley Point and Lynmouth in the five-metre, 25-knot inflatable D class - regarded as the workhorse of the RNLI's fleet.

And in theory she could at any time find herself in charge of an all-female team as Ms Thresher is one of five women crew members at the station.

She said being called out on a real shout just as she was about to undergo her final assessment was a stroke of luck.

"It really helped me get over my nerves: I was so intent on reaching those boys that it took my mind off everything else," she said.

"It's a huge thrill to be the first woman helm at the station but I couldn't have done it without the support of the rest of the crew - the men as well as the women.

"But managing finally to continue the family link is probably the most rewarding part of it."

"She has made great strides in terms of personal fitness and has really thrown herself into learning all the theory, as well as mastering boat handling," he said.

"She is a wonderful ambassador for women in the RNLI."