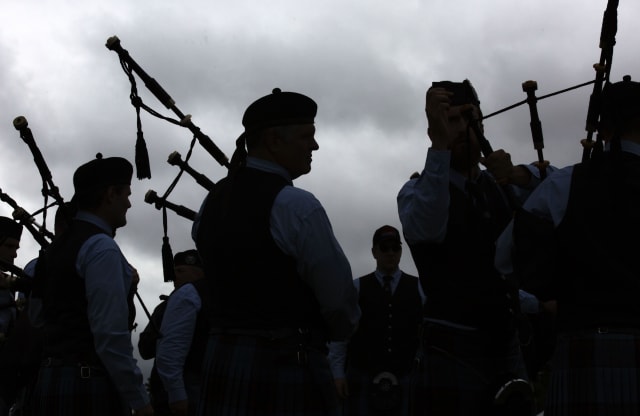 A pipe band from Northern Ireland have been named the World Pipe Band Champions for 2018 following the competition in Glasgow.

The Field Marshal Montgomery Pipe Band won the event, followed by Inveraray and District in second place and St Laurence O'Toole, based in Dublin, who were third.

Around 8000 pipers and drummers from 214 pipe bands took part in the two day World Pipe Band Championships on Glasgow Green, with the results announced on Saturday evening.

Ian Embelton, chief executive of the Royal Scottish Pipe Band Association, said: "The World Pipe Band Championships has always had the capacity to bring the very best out of the hugely talented pipers and drummers that work so hard in their bands to be the best.

"This year, we have been treated to a wonderful example of how compelling and dramatic this competition is, even though it is always contested in the best possible spirit. As always, the pursuit of perfection has been a joy to watch and to listen to."

The World Pipe Band Championships is part of the Partner Programme for the Year of Young People 2018, and this year up to 40% of the competitors were aged under 25.

The first ever World Pipe Band Championships were held at Murrayfield in Edinburgh in 1947.

First held in Glasgow in 1948, the event has been staged in the city continuously since 1986.

"Glasgow is always delighted to welcome so many bands and their supporters and we remain proud to be the host city for The Worlds.

"It has been a wonderful occasion that is as memorable for the extraordinary musicianship as it is for the incredible sight of 8000 competitors on Glasgow Green."

More than 30,000 people attended this year's event over the two days.

As well as pipe bands, the event also hosts Highland Games, Highland Dancing and a showcase of Scottish food and drink.

Bristol in ‘Tier 1 plus’ to control spread of coronavirus, mayor says

Police could not trace 1,009 people who broke international quarantine rules