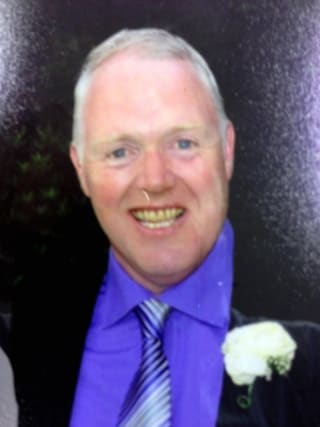 The head of the Prison Service in Northern Ireland has condemned the "disgraceful" decision to light a bonfire emblazoned with the names of murdered officers.

Three petrol bombs were also thrown at police near the city's walls which overlook the Bogside.

A 35-year-old man was arrested and charged with making, possessing and throwing a petrol bomb and is due to appear in court next month.

Fires are lit at this time of year to mark the anniversary of the introduction of internment of republican suspects without trial in 1971 and police are treating the incident as a hate crime.

Prison Service director-general Ronnie Armour, in a message to staff, said: "Using the names of our murdered friends and colleagues, and those of PSNI (Police Service of Northern Ireland) colleagues, in this way has caused great hurt and distress to their families, to the Prison Service, and the wider community."

David Black, 52, was killed by dissident republicans opposed to the peace process during a motorway drive-by shooting in Co Armagh in 2012.

Mr Armour also disclosed messages of support received from Londonderry, or Derry as many refer to it.

One said: "Please accept my sincere apologies for the most disgraceful, hurtful and hate-filled scenes that we witnessed last night at the bonfire in the Bogside.

"I know that I speak for the vast, vast majority of people from this wonderful City (Derry/Londonderry) when I say that this is not in our name and we stand with the families of Ronan, Stephen, Adrian and David at this most distressing time.

"Please pass on my thoughts to the families of Adrian, David and all your fellow officers."

He added: "As a service we will continue to serve all the people of Northern Ireland with professionalism."

Poppy wreaths were also put on the bonfire.

PSNI Chief Inspector Paul McCracken said: "We are treating this as a hate crime and we are seeking to identify those responsible, and I would ask anyone with information that can help identify the perpetrators to contact us."

Sinn Fein has condemned the "display of hate", saying it had "absolutely nothing whatsoever to do with republicanism", while DUP MP Sir Jeffrey Donaldson decried the "inhumane and pure evil" placing of the men's names on the bonfire.

He wrote on Twitter: "Absolutely disgusting! The people responsible for these vile actions have absolutely nothing to offer our society. #somuchforrespectandequality