Hundreds of shoes laid outside Westminster Cathedral in support of refugees 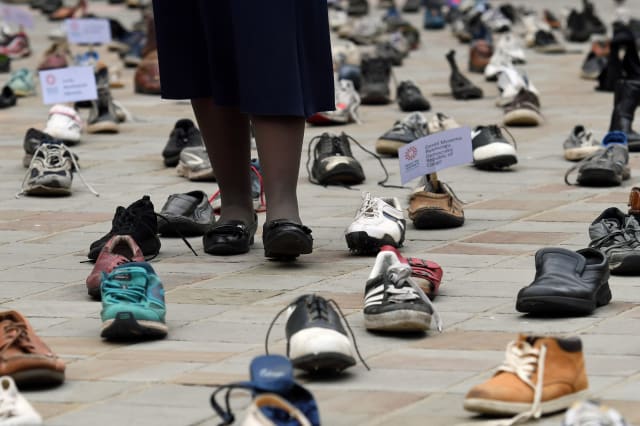 Hundreds of shoes have been left outside Westminster Cathedral to show support for the Pope's Share the Journey refugee campaign.

Pope Francis is using the campaign to urge world leaders to back the rights of refugees, and about 40,000 Catholics have walked the equivalent of four times round the world in solidarity.

Supporters hope a global agreement on refugees will be signed at the UN General Assembly in New York on September 18.

The campaign, led by Catholic charities Cafod and Caritas Social Action Network (CSAN), wants to see protection put in place for refugees, with support for host countries and action to tackle the root causes of forced displacement.

Cafod head of campaigns Daniel Hale said: "We are calling on the UK Government to demand that all world leaders place human dignity at the heart of the global compact agreement on refugees signed at next month's United Nations General Assembly.

"It is important to remember that most people on the move are from poor countries, and most seek safety in nearby poor countries or within their own country's borders.

"The tens of thousands who have taken part in the Share the Journey campaign illustrate an overwhelming response to Pope Francis's call for us to embrace those forced from their homes by persecution and poverty."